Hello and welcome to a new segment on Twinsanity titled The Retro Bin, where we unearth a forgotten show from Toon Town’s past, examine it and basically tear it a new one. Today, we’ll be looking at a Hanna-Barbera “classic” from 1979, The Super Globetrotters. 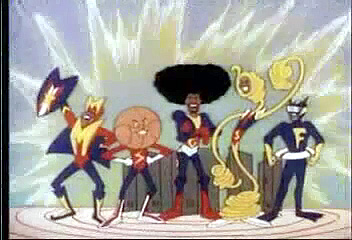 Look! Down on the court! Is it the 1992 Dream Team? Is it the NBA Hoop Troop?? NO! It’s the Super Globetrotters!!!
First, the obligatory history lesson: in 1970 the world-famous Jesters of Dunk were given a Saturday morning cartoon series from Hanna-Barbera Studios in which they would travel the world having wacky adventures. Not content to rest on their laurels, HB gave the Trotters another series, this time adding a new twist: figuring that just having the Harlem Globetrotters in a SatAM cartoon wasn’t enough, HB decided to take the concept one step further and make the Globies superheroes who transform into their super-selves by running into magic lockers. (We are not making this up.) The Trotters of Tomorrow were an eclectic bunch to say the least:
The team received their marching orders from the Crime Globe, a basketball-shaped satellite (voiced by Frank Welker) that would alert the Globetrotters of villainous activities and even give them strategies to fight them.
-Wait, an HB show about a team of superheroes featuring a guy who can turn into water, a guy who can create copies of himself and a guy who can spring and stretch. That sounds kind of familiar…. 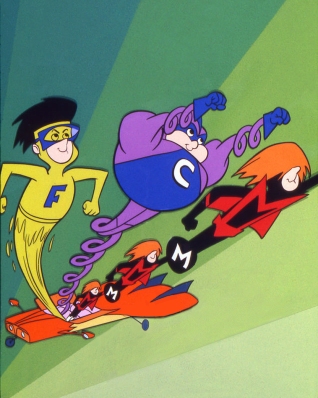 …Hanna-Barbera copying one of their own successful formulas? Nah, couldn’t be. They’ve never done that.
The actual episodes typically blurred together, so it’s not really necessary to go into great detail about them. This opening pretty much sums things up.

The stories were little by way of repetition: The Globetrotters would be playing some exhibition match somewhere when they’d get a message from the Crime Globe warning them that some nut-cake with a wacky-themed costume and gimmick was planning to unleash some diabolical plan of some sort, the Globies would go Super, then the Trotters and the villains of the week would after 15 minutes, shtick each other to a stalemate. Then the Villain of the Week would challenge the Globetrotters to a basketball game for whatever McGuffin they were squabbling over. Since they’re the Harlem Globetrotters, basketball is what they do, they would always accept, expecting a fair game. The villains would always cheat–because they’re villains–and the Globies would get their butts handed to them in the first half, then at halftime the Crime Globe would have to remind them that they’re, like, you know, SUPERHEROES and that they should go Super again and use their powers to beat them. They would, and they would come out triumphant. This happened in every episode. Every. Single. Episode. You’d think just once the Globetrotters would get the idea to become super  at the start of the match, but no. I would have loved to have seen this exchange, just once:

Nate: Why? It’s just a basketball game. We’re the Globetrotters. This’ll be a piece of sweet cake!

Crime Globe: Ah, no. Come on, guys, how many times have we done this? The bad guys are going to cheat and whoop your butts throughout the first half, then I’ll have to tell you that you can’t win this game as regular Globetrotters, then you’ll have to became superheroes to defeat them. So how about this time we skip all that and cut right to the chase??

Twiggy: Well yeah, that’s happened once or twice, but…

Crime Globe: It happens every week. What’s wrong with you?! It’s just like that time you guys met Snow White; you were playing against the Wicked Queen’s living gargoyles and of course the Queen used black magic to beat you, so at half time you finally got the bright idea that since you’re the flipping HARLEM GLOBETROTTERS, that you should be using your exhibition tricks to win, like you should have been doing at the beginning. So go super, now!

Curly: You sure? ’cause I think…

Crime Globe: GET IN THE @#$%ING LOCKERS ALREADY!!

After a single season, the Globies were handed a copyright lawsuit by a certain rock band/superhero trio and also received this letter from the Hall of Justice:

If you really want to save the world, stay on the courts and leave the super-heroics to the professionals. Back off our racket or we’ll make arrangements for you to have to start dragging around 2 annoying teenagers and a stupid dog in a cape.

And that put an end to the practice of basketball stars doubling as superheroes, at least until Shaquille O’Neal took the role of Steel. And we all saw how well that turned out.