Today’s Talkin’ Nerdy is a direct response to a recent video: the latest Vampire Review by Chez Apocalypse internet personality Maven of the Eventide (aka Elisa Hansen), The Monster Mash. (If you haven’t seen Maven’s video yet, check it out first; it’s really good. If you’ve already seen it, we can press on.)

Now, far be it for the likes of us to question the wit and wisdom of Maven; we’re big fans (BTW, Elisa, congratulations on your marriage to Paw Dugan of Music Movies and best of luck to you on your pregnancy, may both of you know nothing but happiness), but if you’ll indulge us, we have a tiny little nitpick or 2 with some of the opinions expressed in this video, and we’d like to submit a few of our own:

First, the matter of Beetlejuice not being a real monster. Really? You don’t think Beetlejuice counts as a real monster? Why not? We think the ‘B’ Guy fits the bill quite well. For one thing, he’s a ghost. For another, he has dark powers, he can perform black magic. For another, he’s scary; in the movie the guy worked as a bio-exorcist. If that’s not a monster, then I don’t know what is.

“I’m not a monster? My neighbors say different! Pfft!”
Anyways, Beetlejuice must be doing something right in pop-culture monster lore, since he’s got an imitator: anyone who doesn’t think that Flabber from Saban’s Big Bad Beetleborgs wasn’t at least partially inspired by Beetlejuice is a moron.

Elvis pompadour and Jay Leno chin aside, let’s examine the facts, shall we? Flabber is a manic “phasm” (as in phantasm) from the 7th Dimension who can do magic, is known for his schizophrenic transformations and basically acts as a landlord to a haunted house full of movie monsters. Sound familiar? I actually think the Beetlejuice archetype should become a trend in monsterdom: maybe if Casper could perform magic, he probably wouldn’t be such a wuss.

Casper: Jeepers. I don’t like black magic. the dark arts aren’t friendly!”
Hairy Scary: Kid, from now on I’m gonna start callin’ you ‘Vacuum Cleaner, ’cause you suck so @#$%in’ hard!
*****************
Talking Point #2: why the Phantom of the Opera is so often passed over in Monster Mashes. I tend to think the Phantom gets the shaft so frequently is because when you get down to the bare bones of it all, the Phantom isn’t technically a monster. He’s just a disfigured human. He doesn’t come from any supernatural species or tradition, he has no powers, he’s just a REALLY passionate artist who got the Two-Face treatment and fled to the sewers beneath an opera house to noodle on the pipe organ. Of course, the Phantom has turned up in some Monster Mashes: he was one of the monsters emulated by the Backstreet Boys in their video for the song “Everybody”, and he has a knockoff character in the Monster High franchise, Operetta. 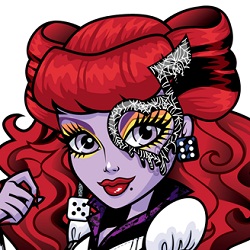 What is with the half-mask obsession? Artists!

But we’ll dig a little deeper (see what i did there?) into Monster High later.

Another character whom we personally don’t think qualifies as a real monster is the Invisible Man. Yes, I know that the Invisible Man has appeared in a number of movies and is often included in Monster Mashes, and sorry, but even as a kid, I’ve always thought that the Invisible Man was lame. He doesn’t have a centuries old lineage. He has no dark powers. He’s just a dude that no one can see. On top of that, he can’t make his clothes invisible, so his one trick only works if he’s starkers. The Invisible Man is just a guy who invented a serum that makes him invisible. How is that a monster? Sorry, Invisible Man, but I have to quote Tony Stark in The Avengers here:

“Everything that’s special about you came from a bottle!”
“But,” you say, “What about Mr. Hyde? He’s the result of of chemistry too!” Mr. Hyde is different. He counts as a monster. First, he’s scary; he’s a brutal fiend who murders people. Second, his alter ego, Dr. Jekyll, is a scientist; the Mad Scientist is a staple of horror movie lore. So yeah, if this guy counts as a monster….

Also not a monster in our opinion: the Hunchback. Same principle as the Phantom of the Opera. Not a monster, just a human with a physical deformity.

“Clam up, dude! I gotta be considered a monster! How else am I gonna get invited to monster parties to score with hot vampire chicks??”
Earlier I mentioned Monster High, which features several monster and horror movie types, although it’s clear that they ran out of good or interesting monsters a while ago. Let’s examine some of their leftovers:
Rebecca Steam, a steam powered robot. No. Not a monster. Robots aren’t monsters. Robots are sci-fi, everybody knows that. If we’re going to start counting robots as monsters you might as well throw a space alien in there too. Aliens aren’t monsters either, but there have at least been classic horror movies about aliens. When was the last time you were watching your local horror movie show on your local UHF channel and saw Attack of the Steampunk Robot?
Jinafire Long, a Chinese dragon. OK, I’ll give you that one, although it’s generally only Western culture that treats dragons as monsters. In eastern culture, dragons are wise and benevolent beings revered as gods.
C.A. Cupid, the adoptive daughter of Eros. Again, not a monster. Greek gods aren’t monsters. Do a Mount Olympus High if you want to do the children of Greek gods. Obviously, Mattel realized this, and the character was subsequently transferred to Ever After High. Granted, Greek gods don’t count as fairy tale characters either, but she’s a better fit there than she was at Monster High.
-In the video, Maven states that the Phantom of the Opera is the most frequently overlooked monster in Monster Mashes. If you’re asking us, there’s another monster type that’s even more overlooked and frequently (and wrongfully, in our opinion) passed over…..

WITCHES.
Why are witches so frequently left out of Monster Mashes? Witches are awesome. They can do magic, they’re typically female (so there’s your gender balance right there) and they’re often dead sexy! So why do you see so few witches on Monster Mashes?
One reason could be because Universal Studios never made a classic horror movie about a witch. There wasn’t an Attack of the Witch, Revenge of the Witch, Night of the Witch, Return of the Witch, etc. Note I didn’t say that there haven’t been any famous literary, legendary or cinematic witches for anyone to use, because we know that not to be the case. A popular witch character in folklore is Baba Yaga, there was also the Wicked Witch of the West (but The Wizard of Oz was produced by MGM, so she couldn’t be a Universal Studios monster), and Maleficent from Sleeping Beauty (OK, Maleficent was technically a dark fairy, but she was along similar lines). But the evidence speaks for itself:
Getting back to Monster/Ever After High, they’ll probably never do this since she’s a main character on that franchise, but I personally think that Ever After High‘s character Raven Queen would be a good fit for Monster High. EAH instantly gets props just for featuring Baba Yaga as a character.
That is not to say that there haven’t been any witches at all in modern-day Monster Mashes:

“Yeah, I don’t get it either.”
-One thing about Bratzillaz: each one had a particular magical power that they specialized in: Yasmina could see the future, Cloetta could change people into anything they wanted, Sashabella could command and communicate with animals, Jade could do love spells, and Meygana had the power to…fly? Um, can’t all witches basically fly, either by their own power or via broomsticks? Isn’t being a witch boasting that they have the power to fly kind of like a human boasting that they have the power to dial a phone?
And I’d be remiss to not mention the 1979 TV special, The Halloween That Almost Wasn’t, in which a witch (played by Mariette Hartley) was not only featured as one of the major monsters, but was also integral to the plot.
Finally, honorable mention goes to the anime Rosario + Vampire, basically a mix of Monster High and a harem comedy, which featured a number of monster girls, among them Yukari Sendo, a bratty young witch.

Snow fairy? Most likely that’s an archetype that’s more common to Eastern mythology than here, but I kind of wish we had that for a monster type. Mizore is easier on the eyes than Sasquatch.

“Whachu talkin’ ’bout? The ‘Squatch rocks the sexy an’ you know it!”
Advertisement