Hello and welcome to another installment of our newest segment on Twinsanity: Nerdvana. For those who don’t know, Nerdvana is the segment where we celebrate the geeky stuff we like. There’s so much ranting and snarking on the internet, we figured we should occasionally break out of cynic mode and say nice things about the things in media that we enjoy. Nerdvana is all inclusive, and can be about anything: a show, a character, an episode, a trope, a song, a skit, anything, as long as it’s something we like and we have something entertaining (or at least interesting) to write about it. Be warned: some of these Nerdvana entries are going to be very free-form and non-linear, and these entries aren’t informative in any way; think of Nerdvana as nerdy ramblings from someone who’s buzzed on Happy Juice and celebratory geekings out from the right side of the brain. That said, buckle up, and let’s begin.

Today I’ll be praising all things, concepts and characters connected to one of the characters on The Hub’s Littlest Pet Shop, Blythe Baxter’s BFF, Youngmee Song.

She’s cute, she’s got purple eyes, she’s a mathlete, she possesses encylopedic knowledge which Blythe sometimes finds creepy, she squees at boy bands and even wrote a song for one, she and Blythe have watched scary movies and tried on identical outfits together, she refuses to call adults (such as Blythe’s dad Roger) by their first names and can’t be made to do so via reverse psychology because she’s “different”. Awww.

Another reason I like Youngmee is because she’s related to this lady, her Aunt Christie. 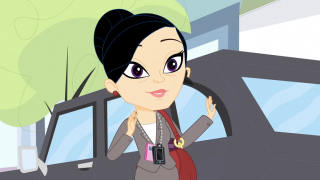 Conveniently located right next to Littlest Pet Shop and right in front of a pile of tires.
Come on. The lady owns and runs a flippin’ SWEET SHOP. For some reason I really like this idea. How awesome a fictional job is that?? Surrounded by cupcakes, eclairs, ice cream sodas, doughnuts, jellybeans, malted milk balls, licorice, lollipops, parfaits, jaw breakers, peppermints, caramels, gumdrops and other assorted fattening tooth-rotting indulgences.

“OK, screw the diet! The only word I wanna hear after ‘healthy’, is APPETITE!” 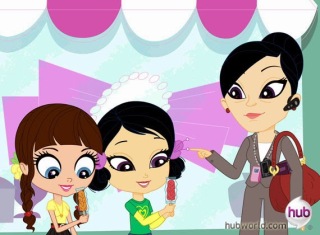 Aww, look at Youngmee’s little hat!
Christie’s personality is largely that of a business woman. She is often seen talking on the cellphone and is usually working. Aunt Christie is often seen doing a combination of cooking, talking on the phone, emailing and interacting with others, showing an extremely good ability to multitask (even going to the degree of performing certain tasks with her feet to save time, such as opening oven doors and catching things she dropped).

Gee, I wonder if they like that box. I don’t know about you, but I could watch these two sing about their box for hours. What?

They’re also the owners of Buttercream Sundae, a adorable pet rabbit who’s clearly been eating too much of the unsold candies.

“Living in a sweet shop is great! I don’t know why you humans are always saying that too much candy is bad for you. Aside from the frequent trips to the dentist, the foaming at the mouth, the periodic blackouts and the odd night sweats, I’m as right as rain!” 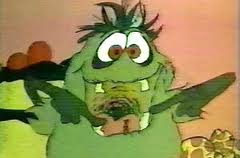 “Yeah! I’ve been surviving on nothing but junk food and no brushing for 45 years, and look how I turned out!”

So there you have it, my celebration of all things Youngmee Song.

“Say, I’m a little peckish. Can I eat that rabbit? I likes ’em raw! I want my baby back baby back  baby back…”

2 thoughts on “Nerdvana: Song of the Songs”