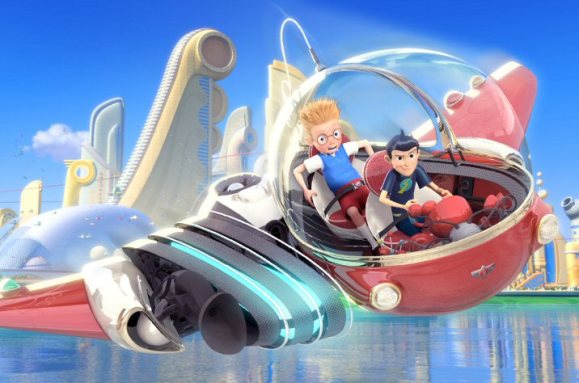 Several folks I’ve talked to think that act 2 of the movie dragged a bit, but personally it was one of my favorite parts of the movie. It was one of the few times that Disney has attempted Looney Tunes style humor and it went off effectively. 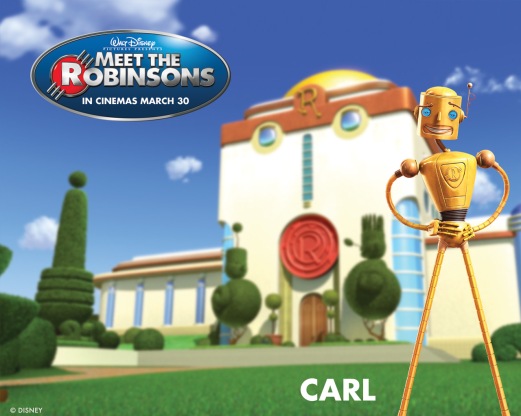 Incidentally, act 2 of the movie is the scene which most closely resembles the children’s book ‘A Day with Wilbur Robinson’, which the movie was loosely based on. In it, a boy (Lewis) visits an unusual family and their home. While spending the day in his best friend Wilbur Robinson’s household, Lewis joins in the search for Grandfather Robinson’s missing false teeth and meets one wacky relative after another. There’s no time-travel or sci-fi elements in the book, just searching for teeth and wackiness.

The Robinson clan is a unique bunch to be sure, and there are a LOT of relatives present, who flit by quickly, so it’s admittedly hard to keep track of them all.

I can’t not love a family who employs a purple octopus as a butler.

Trivia Time: In the book, Tallulah was Wilbur’s sister, not his cousin like in the movie.

Heck, I’ll just let Lewis himself count them off. Just don’t ask about the hat.

Got that? Good, ’cause I’m not gonna repeat it. Now more shenanigans:

(Is it just me, or is Franny kind of hot? Aaaaaaaaanyway….)

I can’t be the only one who thinks that this would make a cool TV series. It’d basically be Futurama meets The Banana Splits. Sure, a few things would have to be tweaked here and there: there are too many extraneous Robinson relatives floating around; an easy solution to that would be to no longer have the extended relatives reside in the mansion, just have them come visit whenever a plot or a gag calls for them. Also, Lewis couldn’t be a regular on a hypothetical Meet the Robinsons series for obvious reasons (which I won’t spoil for those who haven’t seen the film), but I have a solution for that as well: to fill in the role of Wilbur’s best friend…

Just have the family adopt an alien kid. It’s the future, after all.

I’d definitely watch a cartoon like this, as long as the fruit hat stays in the picture.