Today Nerdvana pays tribute to one of our favorite tropes in fiction: space aliens, those guests of ours from beyond the stars.

Today we’ll be listing some our favorite fictional Visitors from Beyond. First, some ground rules:

…Or the human abducting and probing kind. 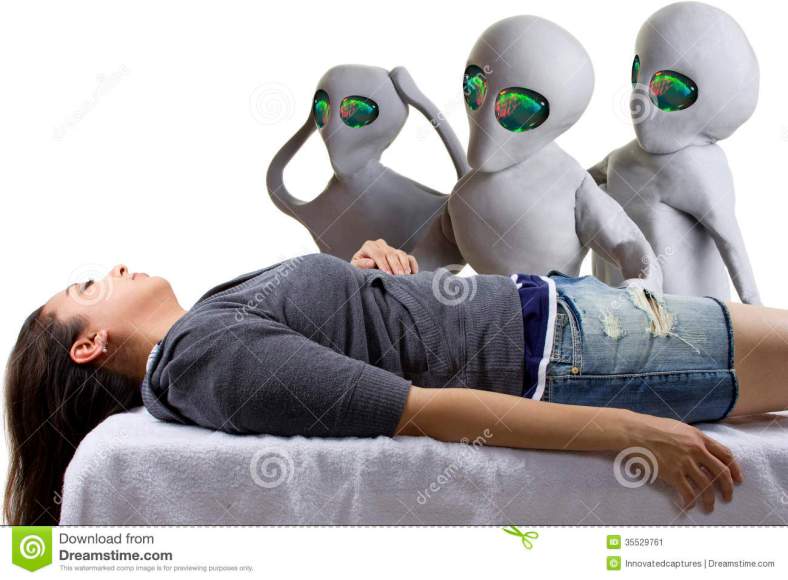 “Now understand, human, that we derive no pleasure from this procedure. This is purely for scientific research. That said, is it OK if my buddies here watch?”

Now that we’ve gotten the preliminaries out of the way,

Jason’s favorite Teen Titan, and who am I to argue? Starfire was and still remains one of our all-time favorite alien characters. She’s a golden orange skinned princess from a species of interplanetary hippies who naturally absorb sunlight and are fueled by their emotions, who can fire heat-and-light energy blasts from her hands thanks to experimentation by a race of scientist shnooks called the Psions, possesses the strength of 7 humans, can naturally fly and absorb language through epidermal contact, i.e., kissing. 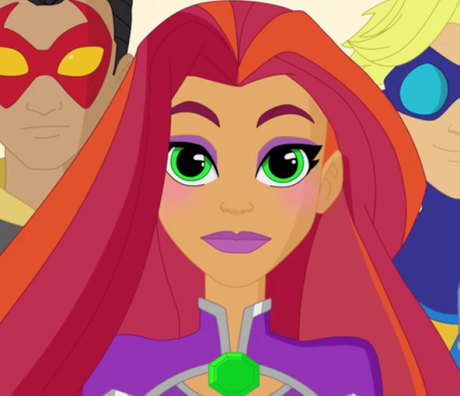 Baby, you can learn colloquialisms from me anytime!

The stars from Mars. They’re from the same planet, belong to the same race (technically Megan is a White martian, but why split hairs?), have the same power sets and M’gann is J’onn’s niece, so we’re listing them together. Martian Manhunter was my favorite character on the CN Justice League show. I like the Martian’s power set: strength, flight, invisibility, intangibility, telepathy, metamorphosis and sometimes telekinesis (MM has been referred to as ‘the Swiss Army Knife of Superheroes’ for good reason); over the years he’s had more powers than a toad has warts, but good producers have modified them to decent effect for a good balance…

…Plus the dude rocks an awesome costume!

As for Miss Martian, imagine Martian Manhunter as a cute, perky teenager. The freckles are a nice touch.

I like how Miss Martian’s costume is a cuter, more feminine variation of J’onn’s. Kind of looks like a super sailor suit. 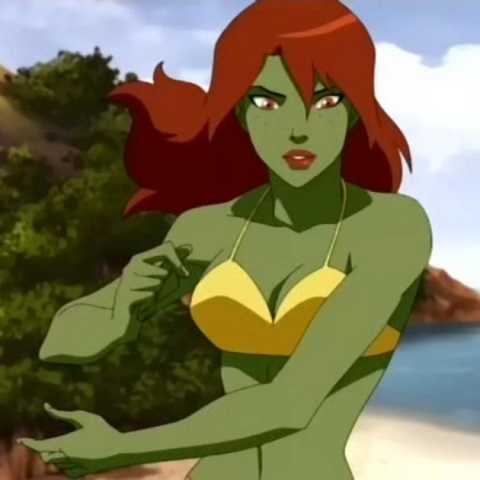 Bonus: the DC Super Hero Girls’ version of Megan is super-shy around anyone else besides fellow alien student Starfire. She squeals and goes invisible whenever anyone talks to her. Awwww.

The show Cosmic Quantum Ray wasn’t around for very long, but I dug this guy while it was. A delightfully daffy super guy from the 9th dimension who can lift a chunk of building over his head, detach his body parts due to being held together by some cosmic mucilage that we mere 3rd dimensional beings can’t see, can fly through space, transform his molecules into any organic substance from steely steel to anti-matter and exist in 6 other dimensions simultaneously. In this photo, Ray just happens to standing in front of a 7th dimensional kielbasa stand.

The Man and Girl of Steel, respectively. Like the Martians, they have the same planet of origin and the same powers, so we’re listing them together. Kryptonians rock, plain and simple. Superman is one of the greatest super aliens of all time… 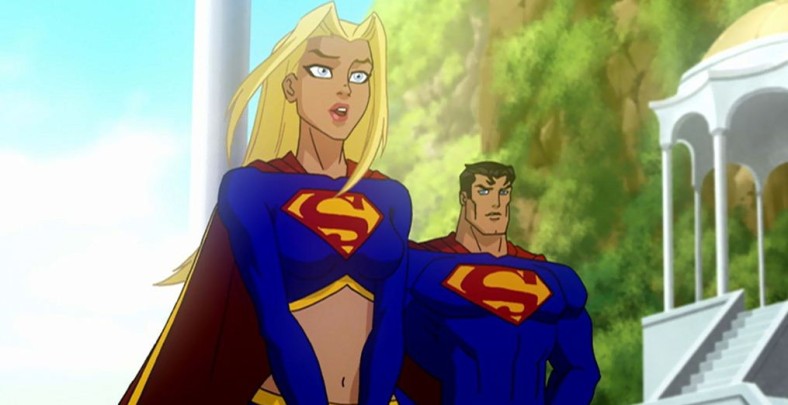 …And Kara has all that, plus Barbie blond hair and an exposed midriff. (No, a bare belly doesn’t make sense to fight crime with, but Kara’s bulletproof so no big deal.)

Now some people feel that the Kryptonians aren’t so great. they think that Supey is a boy scout, that they’re too powerful, that they’re boring and lame, etc. Now those people are entitled to their opinions of course, but in actuality, well, I’ll let Dr. Cox field this one: 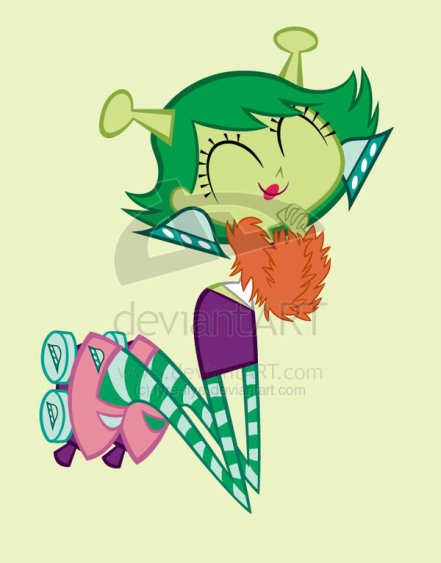 Yet another green skinned Martian, this time with antennae! Mars has always been one of my favorite Galaxy Girls. It’s cool how Lauren Faust chose to represent Mars as a classic green alien (Ms. Faust must like 1950’s sci-fi kitsch too). her symbol is a flying saucer (nice!) and she’s a wacky modern artist who’s not afraid to get her oddball on. As weirdo artists ourselves, we stand by you, baby.

Words to live by.

They’re twins. They’re named after Tarzan (Zan) and Jane (Jayna). Zan’s got the ‘tude and Jayna’s got the sass. Their pointy ears were inspired by Mr. Spock. They can touch and morph into any form of water or any animal, respectively. They’re alien versions of Donny and Marie Osmond. The eat CDs. They get to hang with the Super Friends. Plus they have a blue space monkey which they received as a gift from a space clown. ‘Nuff said.

YANCY ROBERTS (Out of Jimmy’s Head)

The sassy green teleporting space alien sister of the kid who has cartoons in his head, who was adopted by his astronaut mom. OOJH was a train wreck to be sure, but even though this plot point had nothing to do with the show’s premise, Yancy was one of the best parts of OOJH. I guess you can tell that we like our green teens here. 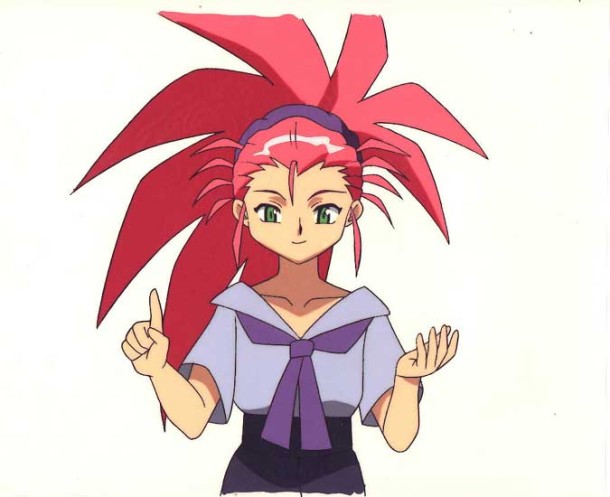 Tenchi Muyo!‘s resident Greatest Scientific Genius in the Universe! Washu’s either an intergalactic mad scientist, Ryoko and Ryo-Oki’s creator, a goddess who chooses to employ technology instead of her natural powers and stay in child form or all of the above, and she’s all kinds of awesome. Anybody who can create a doomsday device and a dimensional portal with a star-shaped door is A-OK in our books.

-And now, some Honorable Mentions:

Everybody’s favorite half-human, half-Vulcan science officer. To not include Spock would be illogical.

Cody Jones’ blue skinned, pointy-eared alien intern. She has no powers, but like Washu she’s a genius (Starlee’s race, the Omatronians, possess twice the brain capacity of humans), plus she rolls around her lab on roller skates, so maybe she’s an honorary Galaxy Girl.

OK, maybe this isn’t a conventional choice, but he belongs to a different race and he was born in space, so I’m counting him. Deal. Who doesn’t like The Cat? He’s a stitch! Delightfully vain and shallow, with a fashion sense even more outrageous than Mars. What’s his special power?

Two more crew members from Cosmic Quantum Ray (technically 1, since they hail from a planet where everyone’s a twin and therefore count as a single crew member). Another set of alien twins, these 2 possessing the powers to create super-strong, super-elastic DNA strands. Atee (the one in pink) is sweet, while Geecee (the one in baby blue) is sassy. Plus they’re pilots with the need…the need for warp speed.

OK, the propeller on top of his helmet serves no purpose since there’s no air in space and the unicycle is kind of dorky, but we can’t help but like an alien ambassador who comes from a planet called Futura (so what did they call it in the past?), lives on an island located at exactly zero degrees longitude and zero degrees latitude and possesses ‘Futomic Energy’ which can conjure up a house in seconds.

Plus he has a mute cowboy puppet and a caveman as his running crew, or flying crew to be more accurate.

So there you have it, our favorite fictional super advanced space aliens. Let’s just assume that they are super-advanced; after all, if they can get here, then they’re already more advanced than we are.

A Squared plus B Squared equals C Squared, Dum-dums!