Hello and welcome to a new segment on Twinsanity called TV Special Tonight!, where we look back at one-shot TV specials, those bonus funfests which would occasionally turn up in prime time as a treat to the kiddos at home and interrupt whatever shows their parents usually watched at that time. Today we’ll be checking out Hanna-Barbera’s All-Star Comedy Ice Revue, a 60-minute live-action/animated television special produced by Hanna-Barbera Productions in association with deFaria Productions which aired on CBS on Friday, January 13, 1978 at 8:00 pm EST and was taped at the Bakersfield Civic Auditorium in Bakersfield, California in December 1977. 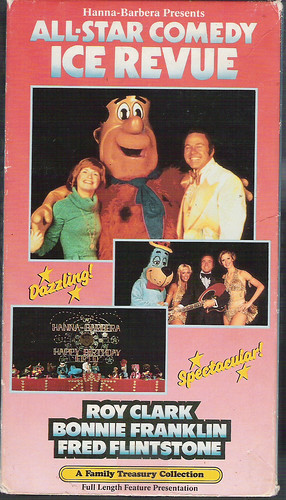 Into the WABAC machine….

Mr. Peabody: Greetings, friends. You are about to enter the dark and twisted era of 1970’s prime time variety. Some of what you see and hear may shock and disturb you. I humbly suggest that those of you with sensitive stomachs and weak constitutions stay behind in the safety of the present.
Sherman: Gosh, Mr. Peabody. I saw some of those shows on the Obscure Oldies Channel and I thought they were kinda funny!
Mr. Peabody: Yes, well you would, Sherman.
*************************************
The year was 1978. You’ve just finished a heaping dinner of Big Macs, Screaming Yellow Zonkers and Drink Me Pop, and now you’re settling down in front of the Boob Tube for a night of good ol’ fashioned brain rot, when suddenly you find that the night’s usual programming has been pre-empted  for an hour because of this….

OK, Houston, right away we have a problem. That’s supposed to be revue, as in a musical show consisting of skits, songs, and dances, but it’s spelled review, as in a revisiting or restudying of subject matter. When the title card of your special contains a typo, you know you’re in for a rollicking night.

“Typography fails. 2 Stars.”
Anycrap, Hanna-Barbera’s All-Star Comedy Ice Review..er, um…Revue, was a celebration for Fred Flintstone on his 48th birthday (or to be more accurate, his 65,000,000, 048th birthday) featuring a bunch of otherwise unemployed actors in giant felt mascot costumes of Yogi Bear, Jabberjaw, Huckleberry Hound, Scooby-Doo, The Banana Splits, Hong Kong Phooey, Quick Draw McGraw, Snagglepuss and The Hair Bear Bunch, assembled together as a celebrity roast of sorts, on a giant ice rink. Keep in mind this was the 1970’s, where ice skating rinks and swimming pools were a staple of variety shows and specials (Donny & Marie and the Brady Bunch each had swimming pools on their variety show stage sets), which were themselves a fixture of TV at the time. Don’t ask me why so many 70’s variety shows contained water as a fixture, I guess it was a side effect of it being the Age of Aquarius.
The show was hosted by Hee-Haw country crooner Roy Clark and Bonnie Franklin, who played divorced mom Ann Romano on CBS’s One Day at a Time, ’cause whenever I think of the funtastic world of Hanna-Barbera, the first 2 names that always pop into my mind are Roy Clark and Bonnie Franklin. The special guest stars were The Sylvers (a 70’s knockoff band who usually got all the gigs that the Jackson 5ive turned down) and featuring Course & Young (a comedy duo whom you’ve never heard of), the Fentons, Sashi Kuchiki, the Ice Capettes and a special appearance by The Skatebirds. (The latter group wasn’t hard to round up since they also had a Saturday morning series on the same network at the time.)
As if all that weren’t spectacular enough, we were also saddled with a plot, sort of: it turns out that the guest of honor, ol’ Fredso himself, isn’t at the gala, but rather just chillaxing at home in front of the tube in Bedrock. Fred was under the misunderstanding that the special was scheduled for the following night, and so he and Barney Rubble have to get up from watching the special on their Stone-A-Vision to scramble to get to the studio in time (“Get Him to the Geek!”). They spend the bulk of this telecast just trying to get there, all the while watching the events unfold via a portable TV that they bring along with them.
Wait, what?
OK. Riddle me this…….

….how is any of this possible? How are Fred and Barney even watching a TV broadcast from millions of years in the future? And how are they supposed to drive to the present?? For that matter, how are Roy, Bonnie and the gang able to hold a TV special for someone who existed 65 million years previous? Is there a time/space vortex somewhere in the middle of Interstate 25? Does Fred know a guy with a TARDIS?

“Actually, I’d say it’s more of a TARPIT: Time And Relative Plotholes In Television.”
OK, enough nitpicking. This isn’t Talkin’ Nerdy. It’s probably best to just write this all off as a product of Hollywood, Land of No Reality and move on.
Anyshtick, with Fred M.I.A., the hosts are forced to stall for time until the guest of honor arrives. Meanwhile, it would appear that hours before shooting started, someone must have conked the dude in the Jabberjaw costume on the head hard, knocking him barely conscious, and as he was coming to, convinced him that he was Rowdy Roddy Piper and that Fred was Hulk Hogan. Ol’ Jaws spends much of the special drunk on Haterade, snarking on Fred and loudly suggesting that with the cave guy in absentia, that HE should be the guest of honor. Some examples of Jabber’s “wit”:

MAMA SAID KNOCK YOU OUT!!

DUDE WITH A ‘TUDE!
It’s never explained why Jabberjaw has this mad-on for Fred, he just does. After the 3rd of 4th shticky put-down, I half expected the hosts to ask, “Seriously, dude, what’s your damage?! Did Fred key the side of your underwater car? Did he sell you out to some whalers? What??” Perhaps Jabberjaw was lashing out because Fred had his then current voice actor, Henry Corden, while Jabber had to be voiced by Don Messick instead of his usual voice actor, Frank Welker. Maybe Mr. Welker got a gander of the script and quit.

HATERS GONNA HATE!
Among this special other “highlights”:

WAVE YO’ HANDS IN THE AIR LIKE YOU JUST DON’T CARE WHERE YOUR CAREERS ARE HEADED!!
Finally, after some more bits (including one involving 4 identical Wally Gators skating around while Bubi Bear of the Hair Bear Bunch chases after them with a fly swatter–what did these guys use to stir their coffee back then?), a large cake is brought onto the stage and at long last, Fred finally arrives, just in time to see the credits roll. 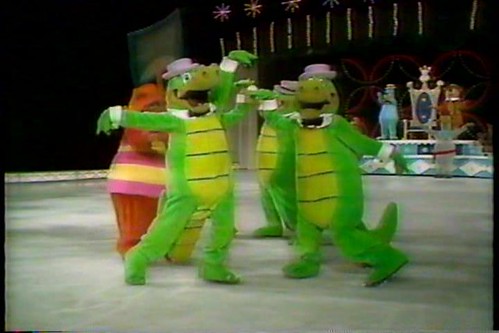 He’s finally here! So what happened to Barney??

So, uh, Fred’s a costumed character now? So, is it only live-action inside the studio? If Bonnie or Roy stepped outside of the studio, would they be cartoons too?? This special just went from ‘Huh?’ to ‘Whaaaaaaat?’
Some people have said that Hanna-Barbera’s All-Star Comedy Ice Revue is H-B’s equivalent to George Lucas’ Star Wars Holiday Special. That’s debatable, but at least the Star Wars special had Jefferson Starship performing “Light the Sky on Fire”, while this one gave us rollerskating dudes in bird costumes, skating on ice.
I can’t sum it up any better than one of the great philosophers of our time, Mr. Yakko Warner:

“If you can’t say anything nice, you’re probably at the Ice Capades!”
Advertisement