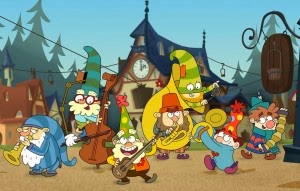 The 7D, the latest animated outing from Disney Studios, made its’ debut this morning on Disney X-D. We’ve already previewed this show no less than twice here on The Twin Factor, but for those who are too lazy to re-read those, here’s the opening:

And now, the overview:

“In The 7D, Happy, Bashful, Sleepy, Sneezy, Dopey, Grumpy, and Doc have ditched (or maybe haven’t yet met) Snow White in favor of Queen Delightful, the slightly dippy monarch of the contemporary fairy tale land of Jollywood. The Queen (and her long-suffering assistant Lord Starchbottom) are perpetually pestered by the husband-and-wife warlock team of Grim and Hildy Gloom — she’s the brains, he’s the…uh, husband. Each half-hour of The 7D promises 2 11-minute stories of the dwarfs foiling Grim and Hildy’s latest coup attempt with much comedic mayhem along the way.”

Thanks to Toon Zone’s Ed Liu for the synopsis.

The Dwarfs’ physical appearances and characters are more exaggeratedly toonified here, but are still what you’ve come to expect from them: Doc (Bill Farmer) is brainy and is skilled at steampunk inventions (complete with Inspector Gadget-like gloved robotic hands and other assorted gizmos stored inside his hat), Dopey (“voiced” by Dee Bradley Baker) looks like Harpo Marx and is prone to whistles, props, sight gags and silliness, Bashful is shy and soft-spoken, typically hiding behind characters and props, even to the point where he’s barely visible during the show’s opening sequence (his twee voice, when he does speak up, is provided by Billy West), Sleepy (Steven Stanton)’s outfit resembles pajamas and he dozes whenever and wherever possible, Sneezy (Scott Menville) is bulbous-nosed, nasally voiced and allergic to everything, sneezing with the ferocity of a hurricane, Happy (Keven Michael Richardson) is jovial to the point of being a little nuts, giddily leaping into cheerily inane songs at the slightest provocation, and Grumpy (Maurice LaMarche) is well…grumpy. (Could be because his hat is an inverted flowerpot.) Rounding out the voice cast is Leigh-Allyn Baker as Queen Delightful, Paul Rugg as Lord Starchbottom, Jess Harnell as Grim and Kelly Osbourne, yes, that Kelly Osbourne, as Hildy.

Personally, I thought it was pretty good myself. The writers did a good job of giving each character a little something to do despite each short only being 11 minutes long. The show’s a tad simplistic, but that’s to be expected given that The 7D was originally slated for Disney Junior (as evidenced by how the episodes’ titles are read aloud by the characters, for the benefit of younger tots who can’t yet read), and anyway not every show needs to be river deep in order to be entertaining. I’ve only seen 1 episode so far, but I can already see Doc, Grumpy and Happy shaping up to be my favorite characters on the series.

Overall, I liked what I saw today, and I’ll definitely be tuning in for more.