Strap on your overalls, tune up your banjos and grab yourself a swig o’ moonshine, ’cause today Nerdvana embraces its’ inner bumpkin by celebrating some of my favorite rural themed cartoons. That’s right, we’re a-headin’…Down on the Toon Farm. Hit it, boys!

Now that we’ve so tastefully set the mood, let’s begin:

One of the locations which has been tickling my animation fancy lately is the farm/orchard home/bread-and-butter of the Apple family from My Little Pony: Friendship is Magic, Sweet Apple Acres.

Fun trivia fact: It was originally called ‘Big Apple Orchard’.
Not only does the property contains a farm house, a barn, and several apple orchards, but it’s also where the legendary Zap Apples are harvested.

I hear these are like Ecstasy, a rocket ship ride and ingesting Pop Rocks and soda all at the same time!
Next, 2 of my favorite Lalaloopsy characters, Sunny Side Up and Berry Jars ‘N’ Jam.

For one thing, these 2 are twins, so they already grabbed my attention. For another, they live in adjacent farm houses. Sunny Side Up, the more tomboyish dressing twin, is named for eggs, which her pet chick specializes in, while Berry is named after berries (duh) which she puts into her trademark pancakes. One sister was named after berries and the other after eggs. You’ve gotta love farm country. 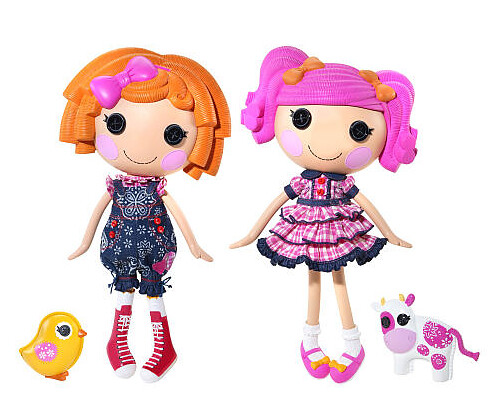 “Eh, we both fared better than our cousin Colt 45!”
Next, this spot for Farm Heroes Saga. It’s long on cute, but I still like it.

That kind of reminds me of a cutesier version of U.S. Acres (known as Orson’s Farm outside of the US), Jim Davis’ not-Garfield comic strip which served as the added attraction on Garfield & Friends. If this were a series, then I picture Richard Horvitz voicing Rancid Raccoon, but that’s just me. One question, though: what the heck are those fruit thingies with the faces? I know some farms genetically modify their crops, but that’s just plain freaky! Speaking of mutants, the bird in that spot looks like a mutant Tweety Bird.

Next, one of the recently retired Ferris’ Funky Farm spots for the McDonald’s Happy Meal, before they axed this campaign in favor of a cringe-inducing red box with a manic grin.

-It’s best not to stare directly at it.

Anyway, opinions on the Ferris spots were mixed to say the least, but I kind of enjoyed them; they had a certain cheesy oddball appeal. I can usually take or leave Klasky-Csupo’s brightly colored sketchy art style, but I thought it worked here.

You know, it occurs to me: these spots were sort of like a bucolic version of Pee-Wee’s Playhouse. (Today’s secret word is ‘hayseed’.) The surreal setting, the odd characters, the presence of such incongruous extinct creatures like a dodo and a dinosaur on a farm setting, all that’s missing is the King of Cartoons. Hey, a dino and a dodo on a farm make more sense than a male cow with an udder.

Finally, I’d be remiss if I didn’t mention one of the first things that attracted me to rural toons, Daisy Mae from Al Capp’s Li’l Abner.

She’s gonna git her a man!

I can only add one thing to that…..

2 thoughts on “Nerdvana: Down on the Toon Farm”