Over the years, I’ve learned a few things about the laws of the universe. Among them:

A good example of the latter would be when ABC was riding high on the success of Gary Marshall’s Happy Days and decided to air a Saturday morning cartoon based on the franchise titled Fonz and the Happy Days Gang. Can you dig it? I knew that you could.

Fonz and the Happy Days Gang was produced by Hanna Barbera studios and debuted on ABC and ran from 1980 to 1982. Actors Henry Winkler (Fonzie), Ron Howard (Richie Cunningham) and Don Most (Ralph Malph) reprise their roles from Happy Days. The shows’ premise has Fonzie, Richie and Ralph, along with an original character, Fonzie cut-up dog named Mr. Cool (voiced by the legendary Frank Welker) having wacky adventures while traveling through various eras in a time machine owned by a girl from the distant future named Cupcake (voiced by Didi Conn, perhaps best known as Frenchy from Grease) trying each week to return to the gang’s own time, 1957, Milwaukee. All of this is explained in the shows’ intro, which was narrated by Wolfman Jack.

The episodes followed a predictable formula: The gang would travel to a different era and have a run in with the local weirdos (including King Arthur and Merlin in Camelot in one episode. Camelot is a work of fiction and not part of history, but whatever…), Richie and Ralph would panic. Mr. Cool would engage in some comically stupid shtick. Cupcake would use her 25th century magic, which more often hindered than helped the situation (more on this later), and Fonz would use his powers of cool to save the day and romance whatever young woman would be on the scene at the time. In fact, Fonzie’s coolness was downright super natural in this series. He could fix anything just by hitting or kicking it,  everything that is, except for the time machine, which would routinely send the gang to the wrong destination in every episode. Just like the Professor on Gilligan’s Island, Fonzie could seemingly do anything, except take himself and his friends home.

Now time to indulge in a bit of Talkin’ Nerdy: It was hard to know exactly what to make of the character of Cupcake. All we knew about her was that she apparently owned the time machine (how she came into possession of the device is anyone’s guess) and that she was from the distant future. Yet she had these magical powers. Was Cupcake a witch? Was she an alien? Do all humans evolve to have magical powers in the future, or was Cupcake in some way unique? Not a single one of these points was ever addressed on the show. Perhaps Cupcake’s magic was the result of scientists genetically modifying tomatoes too much. Who knows?

Fonz and the Happy Days Gang apparently did pretty well in it’s initial season, since it was renewed for a 2nd season. During this time, ABC and Hanna-Barbera produced another animated series based on one of Happy Days‘ spinoff series, Laverne and Shirley. The series was titled Laverne & Shirley In the Army (although the “In the Army” part never appeared on the shows’ title cards) and it debuted on ABC in 1981.

Be all that you can be, and many viewers chose to be somewhere else when this cartoon was on!

The series was loosely based on one episode of the live action L&S titled ‘You’re In the Army Now”, in which L&S join the army and are ordered around by a tough drill sergeant named Lavinia T. Plout (played by Vicky Lawrence).  H-B execs must’ve said “We love it! But let’s replace Vicky Lawrence with a pig!”
Yes, that’s right. The shows’ premise had L&S having wacky adventures in the army while constantly being at odds with their commanding officer, a talking pig named Squealy (voiced by Ron Palillo, who’ll be forever known as Horshack from Welcome Back Kotter), who was constantly threatening to report L&S to his commanding officer Sgt. Turnbuckle, who was mentioned more often than seen. Penny Marshall (Laverne) and Cindy Williams (Shirley) reprise their roles for the cartoon.

“Where’s our cartoon? We was on dat sitcom since day one! An’ then we get passed over for a talkin’ pig?!? What the what,man?!”

One of the most frequently asked questions regarding Laverne & Shirley in The Army (it was posed at least thrice on YouTube) was “Why was L&S’ commanding officer a pig?” I’m guessing that this was still during that time when network executives thought that the presence of an animal character instantly made a cartoon seem more appealing to kids. Apparently, Hanna-Barbera really liked the idea of a cartoon about wacky WACs because over on CBS, The All New Popeye Hour was renamed to The Popeye and Olive Show (which ran for only a half hour) and featured a regular segment titled “Private Olive Oyl” which had Olive and Alice the Goon serving in the army for who knows what reason and driving their commanding officer, one Sgt. Bertha Blast (voiced by Laugh-In‘s Jo Ann Worely) bonkers on a daily basis. Both ideas were inspired by the 1980 movie Private Benjamin starring Goldie Hawn. 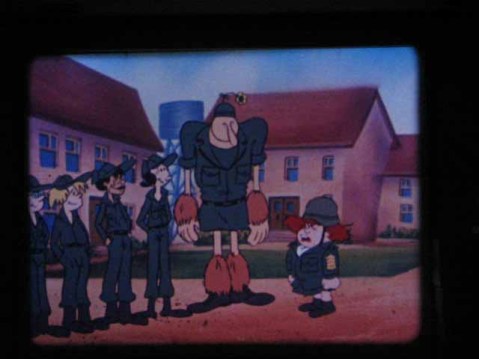 Private Olive Oyl. Yes, this was a thing that actually happened. Someone thought of this. Someone greenlit it, and someone put it on the air.

Anyway, Fonz and the Happy Days Gang ran for 2 seasons. L&S’ 1st season was Fonz’s 2nd season. The following year, an additional 8 episodes of L&S in the Army aired as part of another series which sported one of the longest titles for a Saturday morning cartoon ever: The Mork & Mindy/Laverne & Shirley/Fonz Hour. In these episodes, L&S were joined by Fonzie and Mr. Cool, who were now working in the auto maintenance department of L&S base. There was no final episode of Fonz and the Happy Days Gang where the gang was returned to their own time, but we can assume by this series that Fonzie and Mr. Cool eventually made it home, although the whereabouts of Richie, Ralph and Cupcake were unknown. Either they, like Fonzie, successfully made it back to 1957 Milwaukee or the 3 of them shacked up together in a harem in ancient Baghdad. The mind boggles. Meanwhile, on the live action sitcom Happy Days, Ron Howard and Don Most had left the show. Ron Howard would go on to become a famous movie director, while Don Most would go on to voice Eric the Cavalier on CBS’ Dungeon & Dragons. Ironically, the in universe explanation of why Richie and Ralph were no longer on Happy Days was the 2 of them had joined the army (although both actors returned for Happy Days‘ series finale).  Having Squealy and Mr. Cool together in the same cartoon must’ve blown the needle off of the Annoying Meter, and having a talking animal appearing with a non talking animal pet was just…bizarre. As previously stated, there were only 8 episodes of Laverne & Shirley with Fonzie (the other 5 weeks were reruns of L&S’ 1st season), so I tend to think of this season as Season 1.5 rather than season 2. This series was a co-production between H-B and Ruby Spears (the Mork & Mindy cartoons were produced by Ruby-Spears).

All of these shows were gone from ABC’s Saturday morning schedule the following season. Both series resurfaced (in reruns) on the Pat Roberston owned Family Channel (formerly the Christian Broadcasting Network – CBN) and ran on weekday afternoons under the umbrella title “Fonzie and Friends”, with Fonz and the Happy Days Gang running on Mondays, Wednesdays and Fridays and Laverne and Shirley in the Army running Tuesdays and Thursdays (FAM didn’t air any of the L&S episodes with Fonzie for whatever reason. Perhaps it was felt that Fonzie’s green army pants clashed with his treademark leather jacket. Who knows?). Fonz and the Happy Days Gang turned up one more time in 1999 as part of TV Land’s short lived Saturday morning program block “Super Retro Vision Saturdays”. 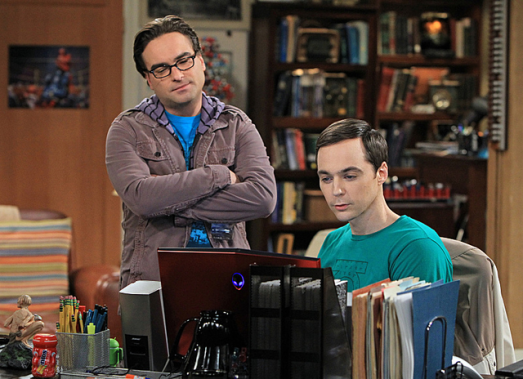 Sheldon: A Saturday morning cartoon about us? I suppose that I’d be open to that idea, provided that we wouldn’t be saddled with some annoying, unrealistic non-human comic relief mascot.

Leonard: We’ve already got one of those, Sheldon.