In honor of the upcoming Fantastic Four reboot movie from Marvel and the fact today is April 4th (4/4–I couldn’t have planned that better if I tried) I’ve decided that now is as good a time as any to go over some of the various opening themes from the various Fantastic Four cartoons over the years.

-A bit dated by today’s standards, but still iconic and full of action. My rating: B.

“Hmm. The dichotomy of order and chaos in that opening calls to mind the paradoxical thought experiment known as Schrodinger’s Cat, as devised by Austrian physicist Erwin Schrödinger in 1935. It illustrates what he saw as the problem of the Copenhagen interpretation of quantum mechanics applied to everyday objects. The scenario presents a cat which may be simultaneously both alive and dead, a state known as a quantum superposition, as a result of being linked to a random subatomic event that may or may not occur.” 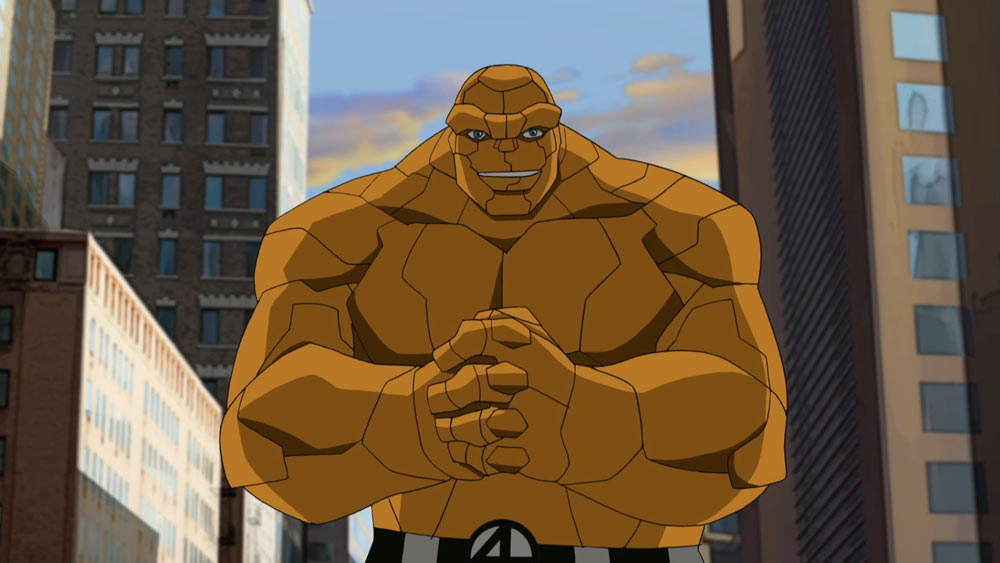 Next up, the 90’s syndicated Marvel Action Hour. This block boasted 2 openings for the team. Here’s season 1’s intro:

OK, this one’s a tad corny, but I think it sums up the goofy, upbeat nature of the team’s adventures pretty well. My rating: A.

“Yeah, I really like the ‘Just 4. No more. Now that’s numerical!’ part. Some people think that opening was too silly, but I personally thought it was OUTTA SIGHT! -What? So lame puns are only funny when you guys do them??”

I guess the producers felt the first opening was a tad too campy and wanted something more serious and epic in tone, but I personally found this intro to be a tad generic; it could have been for any superhero show in the 90’s. But still, it’s not without its’ merits. My rating: B-. 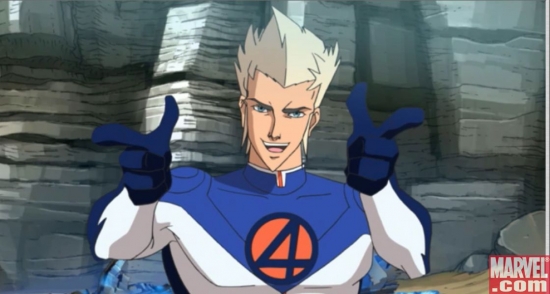 “DUDE! That opening gets me PUMPED! Makes me wanna blaze through town in search of hot babes in my souped-up ride! But then, breathing makes me wanna do that too! Am I right? Up-top!”

(Note how Victor Von Doom was accompanying the team into space during the initial shot. This series was made hot on the heels of those live-action movies, but we’ll forgive them for that.)

Honestly the only thing I didn’t like about FF:WGH was Ben’s outfit. A ‘4’ spray painted on the chest? Really? Plus, the white gap on Ben’s pants made it look like he was in his low-riding underwear.

“Yeah, those weren’t exactly the most stylin’ duds, but whaddaya want? It’s hard to find clothes in my size. I gotta get my stuff from Prof. Fashion’s Boutique for the Big, Tall an’ Freaking Huge!”

Not as good as the others, but still pretty good. Of course now, I’ll be hearing that “aaAAaaah!” in my head all day. My rating: B.

So there you have it. The intros to the Fantastic Four cartoons.

“Hey, you didn’t cover the ‘New Fantastic Four’ cartoon from 1978, you know the one with me in it! Yeah, I was a member of the Fantastic Four, for a few months!”

“Nobody cares about that cartoon, brah. Know why? ‘Cause I wasn’t in it! I was totally workin’ on a solo movie deal during that time. It didn’t happen, but I totally spent that money! BTW, Hollywood, I’m still available for movies, guest shots and reality shows. And the ladies! Which reminds me: anybody wanna see my butt-ring?”