Today Nerdvana pays tribute to a little something called…Postopia.

For the uninformed, Postopia was a website full of mini-games and other goodies launched by Post cereals in the early 00’s. It focused on a quartet of school-aged kids (an African American girl named Chelsea, a studly blond Caucasian boy named Nick, a tiny Asian American girl named Kiki and a brunette boy named Zander) who lived in (or were magically transported to; to be honest, they were never clear on the back story) a high-flying, fun-filled, futuristic planet/dimension/future world/something-or-other known as Postopia. Here’s an ad for it, circa 2001:

As the ad implied, Postopia was divided into 4 specific regions, each one specializing in a specific category of activities and tailor made for each kid:

Space Nation was a floating city which hovered above the surface of whichever planet Postopia was on (or maybe Postopia was the planet–again, not too clear on the back story). Its’ inhabitants were known as the Gravity Breakers, who loved to explore the cosmos, dodging and blasting meteorites and racing comets with their amazing reflexes (and their moms thought they’d never get anywhere playing those darn video games) and encountering extraterrestrial life. Space Nation was Chelsea’s realm of choice.

“Greetings, Earthlings. Welcome to outer space. No littering or flash photography or I’ll vaporize you and your entire planet, ‘kay?”

Nick’s personal hangout spot was Wet World (wow, they must’ve spent a whole minute and a half thinking of that name).

“It’s a play on WESTWORLD, ya illiterate millenials!” I’m a freaking haywire android and I got that!”

As its’ name implied, Wet World was an undersea realm (thankfully its’ natives could breathe water as easily as you and I do air) full of sunken pirate ships and undersea grottoes to explore. You could also surf and ride jet-skis across the waves. The Wet Worlders were known as the Water Loggers, and Nick was the captain of Wet World’s Reef Ball team, according to his bio. 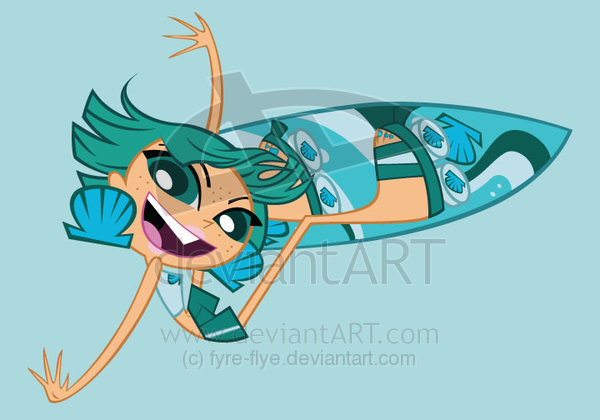 The Ice Burbs (yeesh, where are they getting these names??) was an Arctic style frozen region with northern lights, igloos, snow caps and penguins. It’s where Kiki hung out.

“The Ice Burbs were cool…as ICE!”

You’d think that the inhabitants of the Ice Burbs, the Ice Breakers, would spend their days freezing their wrists off, however, the Ice Breakers had adapted to the climate and as a result were immune to feeling cold, so they could dress any way they wanted. Because of this, the Ice Burbs were the Party Central of Postopia; Kiki and the other Ice Breakers could even go barefoot in the snow.

Finally, we had Futuria, a City of Tomorrow (TM) inhabited by a tribe of super-genius inventors known as the Gadgetrons. Zander made his stomping grounds here, zooming along on turbo powered skates of his own design, building robots and occasionally traveling through time for research and kicks, hopefully not causing too many paradoxes. Futuria was like that old Sci-Fi Channel show Eureeka, only people were watching.

Brain: An entire city of scientific and engineering geniuses with advanced technology and time-travel devices? Pinky, are you pondering what I’m pondering?

Pinky: I think so, Brain, but it it’s called The Learning Channel, why do people feel stupider by watching its’ shows?

Yes, for a while there times were good. Postopia thrived. Chelsea traversed the stars racking up points, Nick swam, splashed and explored the deep blue, Kiki styled and profiled while not freezing her ankles off, Zander designed and built a better robot to clean his room and serve him root beer, and the skies were ripe with love.

But alas, the good times were not to last. After only a few years, Post decided to shut down this wonderful space-age Utopia and handed the keys to Postopia over to the Flintstones. Gone were those amazing realms and in their place went a bunch of not-really-the-Stone-Age themed mini games.

“Hey, why shouldn’t I have gotten Postopia? My picture’s on the cereal box and my franchise has been goin’ for over 2 million years! I swing that kind of lumber! Literally!” I get that the ‘Stones carry a lot of star power, but did you really have to take Postopia away from us? And if you really had to give the website to the Bedrock bunch, you could have at least given it a different name, ’cause whatever this is…

But hang on, what did the Flintstones do when they needed to get back in the public eye and appeal to today’s kids? They crossed over with the WWE! Hey, there’s a thought: why not make a DTV where the WWE holds WrestleMania in Postopia? Let’s get on that, Warner Brothers Animation. Just be sure to toss in the Bella Twins.