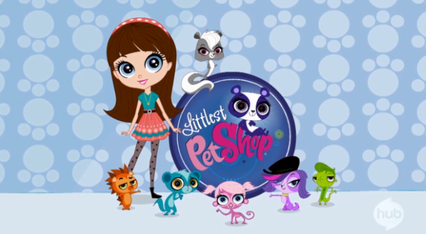 Today, Hasbro’s animated series Littlest Pet Shop (which airs on the Discovery Family channel) aired it’s last new episode of the season, and in case you haven’t heard, it’s also the last episode of the series. Yes, it’s true; Littlest Pet Shop is canceled. Roger Eschbacher, one of the series’ writers, confirms that there won’t be a 5th season of LPS, and that the decision to pull the plug on the show had to do with toy sales, not ratings. So it wasn’t low ratings, ’twas toy sales that killed the beast.

So in view of this news, I thought that I’d offer my thoughts on LPS and in particular, it’s 4th (and last) season. There’s no need for me to go over the series as a whole, since Damon has written a couple of articles on LPS already, which can be viewed here and here.

To start, I’m going to list my choices for the best and worst episodes of the series. NOTE: I’m not listing these episodes in any particular order, so I won’t be numbering them. That said, let’s go, man, go!

Now, some of the highlights from Season 4:

That was an OK twist, but not as good as what I had hoped. Yeah, Blythe finally tells her dad about how she can communicate with animals (about dang time, I say!). She already revealed her secret to her friend Youngmee in season 3, and you have to wonder why Blythe would tell the girl that she’s known for a year or 2 before she told the person who, you know, raised her? As a season finale, “Littlest Pet Street” was OK, not great, but passable. However, as a series finale, this was weak sauce because nothing was concluded. To me, the series should have ended with Blythe finding out that her mom was still alive somewhere and then reuniting with her and/or the Baxters moving away from Downtown City. Damon and I thought that LPS would conclude with Blythe being reunited with her absent mother. We thought that Blythe was going to discover her mother on the desert island and that it would be revealed that Betty wasn’t dead after all, but was just living on the island doing the Dr. Doolittle thing. That may not have made a lot of sense, but it would been a cooler twist than the one that we actually got.

…but I have to say that one thing this show knows how to do is tease it’s audience. LPS’ writers would frequently dangle something in front of it’s audiences’ face like a carrot at the end of your nose, and then pull it away at the last second saying “Just kidding!” I can’t believe that after all those tidbits about Blythe’s mom Betty that were dropped throughout the 4th season the writers still chose not to give Betty a face in the series finale. If Blythe wasn’t going to be reunited with her mother, we could at least gotten to see what Betty looked like via a picture, or a flashback. Give us something, for cryin’ out loud!

Littlest Pet Shop wasn’t a great show, but it was entertaining and fun. LPS’ biggest problem was that it was never able to get out of the shadow of the Hasbro show that preceded it, My Little Pony: Friendship is Magic. Fans were constantly comparing LPS to MLP: FiM, so it was never able to find it’s own voice or establish it’s own identity. I did like how Blythe sported a different hairstyle and outfit in every episode, and I’m glad that she was the only character on the show who did this. If everyone did it, then it would be nothing special. Plus, it would be too much of a hassle for the writers to come up with a new outfit each episode for every single character in the main cast. While I enjoyed LPS, I’m not sorry that the series is ending. Four seasons is a good run. It’s more than many animated series get, and it’s my personal unpopular opinion that NO scripted series should ever go beyond 3 or at the most 4 seasons. I’d rather LPS end while it’s still pretty good than just keep going and going year after year until it becomes a zombie that refuses to stay dead, like some other animated series, but I’m not mentioning any names.

You know who you are.

Hasbro has mentioned that it’s already planning to reboot the Little Pet Shop franchise, and if that happens, a new animated series is likely to follow. We’d like to offer a few suggestions for the new LPS series (if there is one):

Overall, I’m giving the series finale of Littlest Pet Shop a 2.5 out of 5. the finale was OK, but it could have been a lot better. I would have preferred that LPS went out with a bang rather than a whimper, but perhaps the rebooted series will be a tad more electric.

So long, Littlest Pet Shop. It’s too bad that there’s officially one less reason tune in to Discovery Family now. There’s nothing left to say except…Hit it, boys!