By now, I’m sure most of you have seen this ad from Discover Card’s “We Treat You Like You’d Treat You” campaign, titled appropriately, “Twins”.

Now far be it for me to nitpick about a quirky spot featuring cute twins, but….

Sorry, but this would never happen. Why? Allow me to enumerate:

Me: Hello, Mr. Goldstar. My name is Ackbar Mackbar, and I have a wonderful opportunity for you. All I require is $50.

Goldstar: Silverstar, I know it’s you. I already told you, I’m not giving you $50 for that statuette of Big Barda!

So yeah, this ad’s totally busted, but I can still give it a marginal pass since Lisa and Julie are total cutie-pies.

Today’s 2 Funny is a classic (?) from Robot Chicken, “The Amazing Adventures of the Olsen Twins”. Given that this is The TWIN Factor, I’m surprised we haven’t shown this one already. It’s gloriously ridiculous. Call me kooky, but I’d kind of like to do a cartoon similar to this about a pair of twins. Plus, any skit that references the Wonder Twins is A-OK in my book. Enjoy.

-There’s a slight continuity error, though: originally, Mary-Kate is the one who transforms into a giant eagle a la Jayna, and Ashley transforms into the bucket of water a la Zan, but when they arrive in the city and change back, they’ve switched. Eh, it’s still more entertaining than New York Minute.

This is a picture of Hello Kitty, correct?

Wrong-o! First, weird that this is the 2nd mention of Hello Kitty on this blog in as many days, second, nope, this is not Hello Kitty. This is a picture of HK’s twin sister Mimi White (I’ve also seen her called Mimmy or once even Minny or Missy, but I hate indecision so henceforth I’m just going to call her Mimi to save time). What, you didn’t know Hello Kitty had a sister? Where’s Mimi’s merchandise empire? How do you share a womb with someone for 9 months and then get lost in that other person’s shadow? It’s for these Beta siblings that we devote today’s Beyond the Background to: The Forgotten Twins.
Let’s start with Mimi here: Who is she? What do we know about her? Well, for one thing, Mimi wears a yellow bow on her left ear while Kitty wears a red bow on her right, for another, she seems to be shy and has a slightly less outgoing personality then Kitty does, but they still seem to highly enjoy each others company, which could explain why she isn’t as famous as Kitty is: she seems to have social anxiety up the wazoo.

“My hobbies include playing with my sister, hiding and barely speaking above a whisper. Oh, and I’m a huge fan of IFC’s ‘The Birthday Boys’. Stop staring at me!”

Still, I imagine it must be grating to be less famous and less popular than your twin, perpetually stuck in the shadow of the person who’s your age and looks just like you. To be forever known as “That famous character’s twin”.

Kiki and Lala are a pair of celestial human (I think) children who were big in the 80’s. FTR, Kiki’s the blue haired one at the top, Lala’s the pink haired one at the bottom. True story: when I first heard these characters’ names, I thought Kiki was a girl with short hair, but I later found out that he is in fact a boy. I’ve never met a dude named Kiki, all right? But unlike Kitty and Mimi, these 2 are both the titular characters of their merch line and they’re both famous together as a team. No one twin is more important, prominent or popular than the other, and both are regarded as equally cute.

“Yeah, right, bro. Face it: your cheeks are just as pinchable as mine. We’re adorable, deal with it.”
There are other characters who share Mimi’s plight. Let’s look at Lin-Lin (aka Rin-Rin) from Capcom’s Darkstalkers video game series.

For those who don’t know, Lin-Lin is the twin sister of the Jiang Shi/Chinese vampire/zombie thing Lei-Lei (the more common Western names are Hsien-Ko and Mei Ling, but I refuse to call them that; Ling-Ling and Lei-Lei have more of a ring to them). The 2 of them actually comprise the Jiang Shi together, with Lei-Lei acting as the body while Lin-Lin takes the form of the talisman which adorns Lei-Lei’s hat. 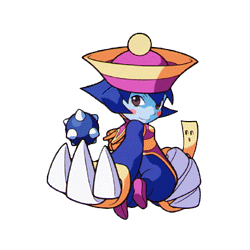 That’s Lin in the corner…”

Because of this, most people assume that Lei-Lei is just 1 person (and we all know what happens when we assume…). We rarely see Lin-Lin in human form in the games, outside of ending cinemas and special moves. For example, Lin-Lin can occasionally separate from Lei-Lei for a super art, and in one of vampire Demtri Maximoff’s special moves, he turns his opponent(s) into female versions of themselves (or cuter versions of themselves for female opponents) right before emptying their tanks and feeding on them; for the twins, he splits the Jiang Shi into tween versions of the twins wearing adorkable pajamas.

The twins’ ending from Pocket Fighter…

…And their Midnight Pleasure transformation. Aaaaawwwww.

Another forgotten twin is Skeeter, an original character created for Jim Henson’s Muppet Babies. Clearly not wishing to receive the same flack that NBC was getting for there being only 1 female on Smurfs, CBS created the character of Skeeter so there’d be another chick in the nursery besides Piggy. Personality-wise, Skeeter was the anti-Piggy: an athletic tomboy who sounded like Bobby from FOX’s Bobby’s World (not surprisingly, since Skeeter was originally voiced by Bobby creator Howie Mandel, later by Frank Welker when Mandel left the show).

“My brother’s still a nerd, BTW.”
Despite being popular with fans, Skeeter never officially made into the Muppet canon; AFAIK, it had something to do with ownership rights. I thought it would have been cool if Skeeter had been the new Muppet player to join the gang in the movie The Muppets, but alas it was not to be. To be honest, I’d have rather gotten Skeeter than Walter.

Yet another forgotten twin is Mary Test, the quieter of Johnny Test’s genius twin sisters.

Gee, I wonder if this girl likes moons.

Mary is a teenage super-genius with a lab that she and her sis Susan share, where they concoct all sorts of cool stuff from robots to super powers, yet due to her gentler, more soft-spoken demeanor, poor Mary is often lost in the shadow of her bolder, more outspoken twin Susan, the yin to Susan’s raging yang, Mary is too frequently relegated unfairly to be player 2 to Susan’s player 1. She’s even ignored by Susan’s personal stalker, Eugene “Bling-Bling Boy” Hamilton.

“Yeah, seriously, what’s up with that? I know it’s just Eugene, but still it can bug a girl. Am I chopped liver? What’s wrong with me? Do I reek or something? Maybe I should start wearing shorts!”
However, in spite of (or perhaps because of) Mary’s ‘secondary’ status, she’s managed to amass a small fan following on the internet. There are even some Mary Test fanfics on fanfiction.net. I kid you not, look it up.
**************************************
And I’d be remiss if I didn’t mention the original forgotten twin, Luigi of the Super Mario Brothers.

“It’s a-me! Not-a Mario!”
Fun trivia fact: in Japan, Luigi’s original name was Ruichi, meaning”similar”, so he’s Mario’s twin in the truest sense of the word.
For many years, this guy was stuck in the role of Player 2, a perpetual second banana to his older brother, Mario, arguably the biggest game mascot of all.

“Ya think that’s bad? What about us? We get starring roles in Super Mario Bros. 3, we’re real popular with fans, then Nintendo introduces that nimrod Bowser Jr., and now we can’t even be called Bowser’s kids anymore. We’ve been reduced to minions! Freakin’ MINIONS!”

“Oooh, Thanksgiving dinner’s gonna be awkward!”
But Luigi’s one of the lucky ones; he’s managed to come into his own. He’s gotten a couple of solo game titles, Mario is Missing! and Luigi’s Mansion, he’s snagged himself his own princess, Daisy…

“We got to talking at a Less Popular Relatives party and hit it off. What can I say? Second bananas are hot!”
He’s gotten his own internet meme….

…And he’s even gotten his own year. Nintendo declared 2013 the Year of Luigi. Now that’s an accolade.

“So where’s my year, huh? Let’s get on that, Sanrio! Oh, are you looking at me again? I’m hiding in the umbrella stand!”