Today the Couch looks at the quickly gone and forgotten 10th incarnation of Hanna-Barbera’s Scooby-Doo franchise, Warner Brothers’ Shaggy and Scooby-Doo Get a Clue!. 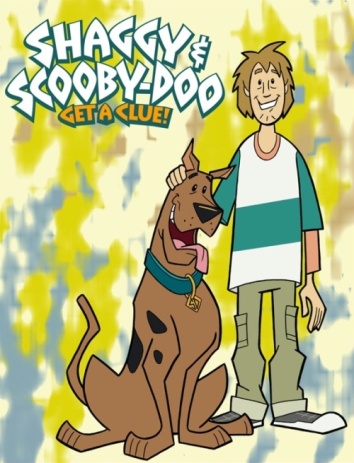 Shaggy and Scooby-Doo Get a Clue! debuted on September 23, 2006, and ran for two seasons during the Kids WB Saturday morning block of The CW Television Network. The show’s second season premiered on Teletoon in Canada on September 6, 2010.
This series boasted a number of notable features: Despite being produced by Warner Bros. Animation, this was the last cartoon series produced by Hanna-Barbera co-founder Joseph Barbera. This show also came along right on the heels of the 2002 live-action Scooby-Doo movie, so the characters were redesigned to resemble their movie counterparts; Scooby was drawn with dot eyes, for example. Get a Clue! was the third show in the Scooby-Doo franchise, after A Pup Named Scooby-Doo and What’s New, Scooby-Doo?, that was not animated or drawn in the usual Hanna-Barbera style. This was also the first series in which Casey Kasem did not voice Shaggy, but was instead done by Scott Menville (although Scott Innes or Billy West have portrayed the character in many of the Scooby-Doo animated movies made for television or home video). However, in this series, Kasem did voice Shaggy’s rich and on-the-run Uncle Albert. Another noticeable difference was that Shaggy wore a white short-sleeved shirt with a green stripe across the middle and green sleeves instead of his trademark green t-shirt (Shag didn’t even sport his red shirt from the 80’s here). Frank Welker still did Scooby’s voice, replacing the late great Don Messick, who died of a stroke in 1996. In addition, Shaggy and Scooby are considerably not as cowardly this time around.
******************************************************
Get a Clue! was one of the rare Scooby shows which deviated from the usual formula of the Mystery, Inc. gang solving mysteries involving fake ghosts and monsters. Unlike in, say, The 13 Ghosts of Scooby-Doo, in which the selling point was that the monsters were real, here we got no ghouls, spooks or ghosties at all, real or otherwise. The premise of the show revolves around the fact that Shaggy Rogers’ incredibly rich Uncle Albert Shaggleford disappears and names Shaggy as his sole heir for an inheritance. With the help of the inheritance, Shaggy has upgraded the Mystery Machine, so it now has the ability to transform itself into a number of other different vehicles, like the “Hot Dog Making Machine”.
******************************************************
Dr. Albert Shaggleford had made some enemies before disappearing, though. Among the most dangerous is the archetypal evil genius and technology pirate out to take over the world and/or become immortal–truth be told, his motivations were about as clear as Gargamel’s—Dr. Phineas Phibes (who gets his name from the Vincent Price villain The Abominable Dr. Phibes). Dr. Phibes recruits various sidekicks and minions to help him with his plans, among them Dr. Trebla. (Dun-dun-dunnn!)
*******************************************************
It appears that the supposedly late Dr. Shaggleford was, beyond being rich, an inventor in his own right, and his clueless young heir is now in possession of some very interesting nano technology. The top secret nanotech formula has been mixed in with Scooby Snacks, which, when eaten, cause a variety of day-saving side effects.
The duo are also aided by Robi, A loyal robotic servant with a tendency to bust through walls and other highly destructive things without second thoughts. Robi would also have various uses for Shaggy and Scooby, though he is a rather lousy cook, various impressions, and giving out safety tips Insector Gadget style. He also projects holograms of Uncle Albert when he wants to talk with Shaggy. One clever bit was that Robi also usually called Scooby “Rooby Roo” due to misunderstanding Scooby’s unique vocalizations.
*********************************************************
Shaggy and Scooby-Doo have a mission: armed with an updated Mystery Machine, a loyal robot servant, their new riches and the new and improved Scooby Snacks, they must stop the evil plans of Phineas Phibes and save the world. In episode 2, Shaggy upgrades the Mystery Machine from its original form, to a high-tech transforming vehicle. However, it usually transforms into machines inappropriate for the tasks at hand. In their spare time, Shaggy and Scooby are fans of the show Chefs of Steel, the famous mystery solver Chad Chatington, and the giant monster-fighting robot named Badgerly, the Adverb.
*****************************************************
What of the rest of the gang? Fred Jones, Daphne Blake and Velma Dinkley only made occasional appearances; only appearing in 2 episodes of season 1. Fred and Daphne made a non-speaking cameo in a single season 2 episode, getting barred from entrance to a party. However, their silhouettes run across the screen in the opening credits in amongst the silhouettes of all the show’s regular cast. 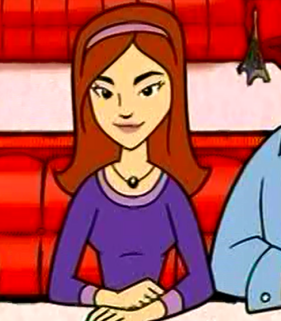 “Hey kids, you’re probably wondering why we didn’t get a bigger role on this show. Well frankly, so are we! Why do I keep getting passed over? I’m hot!” 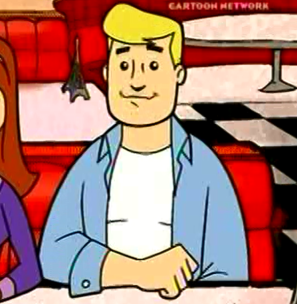 “No parts for us in any of the Superstars 10 movies and now this? Seriously, what’s the deal? You gotta be perpetually hungry to get a decent role on one of these shows??”

“Look on the bright side. At least we didn’t have to appear in those lame-oh Richie Rich/Scooby-Doo Show episodes where it was just Shaggy, Scooby and Scrappy driving around the countryside being chased by somebody! Geez Louise, what were they thinking??”
*********************************************************
Trivia Time: Coincidentally this is not the first time that Frank Welker has done the voice of Scott Menville’s pet as the two of them did the voice of Ma-Ti (Menville) and his pet monkey Suchi (Welker) in the 1990-96 cartoon Captain Planet and the Planeteers.
Further coincidence is Scott Menville’s voicing Shaggy, a character previously voiced by Casey Kasem. Both voice actors have also played Robin in Teen Titans and Super Friends respectively.
Here’s the opening:
A YouTube commenter referred to Shaggy and Scooby-Doo Get a Clue! as “the series which raped the Scooby-Doo franchise”, and apparently Warner Brothers must have felt the same way, as this show hasn’t seen the light of day since its’ initial run on Kids’ WB!. So far it’s never even resurfaced on Cartoon Network, and they used to carry Pink Panther and Pals. A friend told me that WB has basically swept this show under the rug and refuse to so much as acknowledge it anymore. Myself, I have no comment on how good or bad the series was, for you see, there’s another notable feature about Get a Clue!: I’ve never actually seen an episode of this show. I kept saying that I was going to check out an episode just to say I’d seen it, but the series went off the air before I ever got to. That said, based in what I’ve read about Get a Clue!, I have to say that I didn’t think the idea sounded all that bad, at least not on paper. The show’s theme song was delightfully ear-splitting, and the premise actually sounds pretty fun: 2 kooky funsters suddenly finding themselves super-rich living it up in a mansion with a robot butler, the latest high-tech toys and super power-inducing nanotech to play with, that sounds pretty cool to me, sort of like Richie Rich meets Dexter’s Laboratory. In fact, it sounds similar to a show idea I had about a year ago with the working title Dream, about the kooky children of wealthy boo-billionaire celebrity parents who have crazy-cool fun in their high-tech pleasure-filled mansion while driving their butler/nanny crazy; it would’ve been like Disney’s Jessie, only good, but I digress. I think perhaps the problem people had with this show is that it was just too great a depature from the usual Scooby fare. No fake ghosts, no mysteries, little to no Fred, Daphne or Velma, and those dot eyes on the Scoobster were just kind of jarring. Like another infamous Kids’ WB! bomb, Loonatics Unleashed, Get a Clue! might have fared better if the producers had went with all-new characters in the lead roles instead of placing this in an established franchise since it was such a huge deviation from the norm.
*******************************************************
So while I never actually saw Shaggy and Scooby-Doo Get a Clue! (I know some episodes of this are available on DVD, so maybe I’ll check it out one day), I can’t entirely hate on this show. Ultimately it may not have worked, but I have to at least give Warner Bros. credit for trying something different, especially since it didn’t involve Scoob and Shag just drifting aimlessly around in the Mystery Machine and getting into endless brainless chase sequences with some big goon again and again.

6 thoughts on “The Couch: Shaggy & Scooby-Doo Get a Clue!”