If you’ve been following the news for past few weeks, you’ve undoubtedly heard or read the declaration made by Japan’s Sanrio company that’s shaken up the nation:

Sanrio’s mascot, Hello Kitty is NOT  a cat!!

“So what happens if I get sick? Do I go to a doctor or a veterinarian?”

In the words of Phillip J. Fry, “I’m shocked! SHOCKED!…Well, not that shocked.
The president of Sanrio goes on to explain that Hello Kitty is not an actual cat, but rather, she’s the personification of a cat. Her actual name is Kitty White. She’s a little girl, but no more an actual cat than Mickey Mouse is an actual mouse. Hello Kitty wears clothes. She stands, walks and talks like a human. She even owns a pet cat named Charmy Kitty.
He almost had up until he said that Hello Kitty owns a pet cat, but more on that later…
So going by that logic, then that means that Gumball Watterson isn’t a cat either, which he isn’t.

Gumball is a human with cat like features. Gumball went “meow!” in one short and was seen hanging out with H-B characters Tom (of Tom & Jerry fame) and Top Cat in one of Cartoon Network’s 20th Anniversary spots, but those are the most cat-like things that Gumball has ever done.
For all intents and purposes, Gumball is an anthro, but definitely more human than animal.
Honestly, I think that fans outrage over this news is no more than a knee jerk reaction. After all, the practice of creating anthropomorphic animal characters who are essentially humans in animal guise is nothing new. Anybody remember this guy?

Huckleberry Hound, despite his name and appearance, has done very few canine things in his long career. He was even employed as a dog catcher in one of his original shorts. He must’ve really needed the money.
Heck, among the most famous anthros of all time are the Teenage Mutant Ninja Turtles (granted, the Turtles were ordinary animals who were anthropomorphized through mutation, so they now can be thought of as at least part humanoid, although I’m still not feeling the idea of any of the Ninja Turtles dating human women. 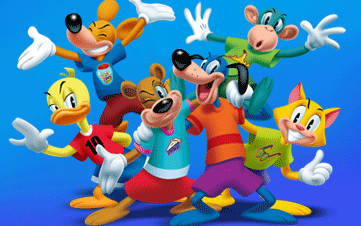 “Check us out! In your face, natural order of things!”

…But even those characters are preferable to THESE animated abominations!!

What has science wrought?!? Someone think of the children!!!
*******************************************************************
The characters on PBS’ Arthur aren’t animals; they’re mutant humans with animal heads! The females have full heads of hair. They’re fully clothed. They have completely human anatomies (including human fingers and toes). They don’t even have tails. Sorry, but when cartoon animals are anthropomorphiszed to the point where they have human feet, then it officially has crossed over from being cute to creepy! animal heads on human bodies may seem endearing in a cartoon or a video game, but in the real world, not so much.
If you saw these creatures in your neighborhood, they’d soon be chased out of town by angry villagers wielding pitchforks and torches. Talking animals are fine when not being human is part of their shtick, but keep it in Cartoon Country, please.
Advertisement