Today’s installment of Beyond the Background spotlights that rare sub-species in pop culture: the all-female Monster Mash. Today we’ll be shining the spotlight on a gang of monster girls who all attend a special school together.

Ah, no, not them. Believe it or not, kiddies, there was another ghoul girl gang before Monster High. Today we’ll be looking at the girls from Miss Grimwood’s Finishing School for Ghouls, the finishing school for the daughters of monsters, as featured in the Hanna-Barbera Superstars 10 TV movie Scooby-Doo and the Ghoul School.

Scoob, Shaggy and Scrappy were employed at Miss Grimwood’s boarding school for a single school year as gym teachers, though they spent most of that year being scared, running away from people and things and having to save their students from a swamp witch with a web fetish. Anyways….
The school’s headmistress was (no prizes for guessing) Miss Grimwood, who had an octopus butler and a floating hand in her service, as well as a pet dragon named Matches who acted as the school’s ‘guard dog’. Miss Grimwood definitely had a preference for the macabre, but what kind of monster was she? She didn’t seem to possess any kind of dark power nor did she seem to come from any kind of supernatural or paranormal lineage. Maybe she was just a Goth.

“I did assemble this outfit at Hot Topic, yeah.”
Now on to the students. First up, we have Sibella, the daughter of Count Dracula and one of his many, many, many wives, girlfriends, lovers and flings. (Vampires are the playas of the monster world, after all.) Sibella is very kind, polite and generous, though not above using vampire powers or her bat form to her advantage in sports such as volleyball and racing. She has a frequent habit of making puns on words to make them relate to vampires, such as “Fangtasic to meet you.”(Yay, puns.) She seems to be creative with clothing, making a bat robe for her father and a fire proof one for Matches, and she seems to be able to go out in the sunlight with no difficulty, though she doesn’t appear to sparkle in sunlight either.

“Darling, I sparkle everywhere I am! I just got it goin’ on like that!”
In addition to being the second tallest of the ghoul girls (tied with Phantasma and second only to Elsa) Sibella is, dare I say, the hottest among the girls. I’m starting to like the color purple more and more…

“SHE’S AN UNDERAGE CARTOON VAMPIRE, YA FREAK! STOP THINKIN’ WITH YER PANTS AND GET ON WITH THE ARTICLE! OH-OOOOOOOOOOOOOOOOOH!!!!”
Next up, we have Winnie Werewolf, a brave, tough, sometimes over-confident 8-year-old lycanthrope, possessing superhuman strength, speed, and senses and perhaps as a result of her wolf-like nature, she is notably the most athletic of the girls, once challenging Sibella to a race.

“Yeah, I’m pretty awesome at sports. I basically rule all of ’em! Well, except maybe swimming. I don’t swim much; when I do the pool sometimes gets clogged with globs of hair. I have body hair issues.”
Next there’s Elsa Frankenteen, the teenage Frankenstein monster. She’s a tad slow and lumbering, with a facility for stating the obvious, but she’s got heart (or to be more accurate, 2 of them) and while lacking the speed and agility of the other girls, she compensates with great strength and extreme durability. 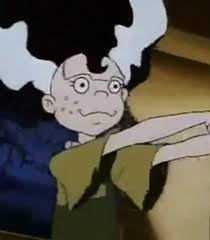 “I guess I’m pretty strong. I did once lift the entire school to retrieve a soccer ball. But my real passion is Mad Science. I’m majoring in Dark Matter studies and minoring in Building an Army of Atomic Supermen.”
Next up is Phantasma the phantom. She’s loud, hyperactive, wacky and silly, with a high-picthed cackling laugh, but is actually smarter than she appears. She also loves to play, float, and run around. Being a ghost, she can float through many objects. She can also spin her head around like an owl. As a spectre, Phantasma can become intangible at will. This makes her able to phase through both inanimate objects and people alike. She’s also a talented organ player, having composed an original piece which she wrote and performed with with Miss Grimwood’s hand keyboard with her octopus butler on drums; it was called “Duet for Three Hands and Six Tentacles”.

“I’m totally gonna be a rock ‘n’ troll musician when I grow up! I’m gonna come on stage in a flashy cape and start my shows by saying, ‘It’s showtime, folks!'”

“You’re adorable, kid, but that’s my line. The only things scarier than me are copyright lawyers!”
Finally we have Tanis the mummy, the youngest and shortest of all the girls, with an innocent demeanor. She’s a literal thumb-sucker. Cute, but not nearly as hot as Monster High’s Cleo DeNile.

“Who says I’m not hot? Underneath these wrappings, I look like Zoe Saldana!”
Lastly, it’s worth mentioning that Miss Grimwood’s Finishing School for Ghouls was adjacent to Calloway Military School, a military academy for boys. the Grimwood Ghouls had a long-running rivalry with Calloway due to the boys constantly beating them at volleyball (this is why Scooby and pals were brought on as gym teachers in the first place). I wonder if the girls like the boys now?

“Like them? Why, they were DELICIOUS!”
So no rematch, then.