As the title suggests, today’s Nerdvana is about My Little Pony: Friendship is Magic.

Before we kick things off, a little disclaimer: this is NOT a review. I won’t be reviewing the show or any specific episodes. Why? For one thing, MLP: FiM is one of THE most reviewed shows on the internet right now, so we’re not going to be the umpee-seven thousandth people to tackle reviewing this show, especially since we’re only extremely casual viewers of the show. Second, say it with me now: Twinsanity is not a review site. We don’t do reviews here. This is a Nerdvana. I’ll just be rambling on and geeking out over some things I like about the show’s universe. Now that that’s out of the way, let’s get cracking.

One thing I like about MLP: FiM is how its’ central setting is a melting pot for all 3 of the Pony tribes: Earth Ponies, Unicorns and Pegasi. Each of them has their strengths and brings something different to the table, and nobody’s dead weight. Everyone has something to contribute to their society. There are no Kardashians or Duggars in Ponyville.

Why are the Unicorns cool? Come on, do I really need to explain this? They can do freaking magic. Initially, MLP Unicorns could just teleport (or “wink out” as they put it; G1 Twilight would ‘port by saying “I wish” thrice, cute) which was pretty good, but now they do telekinesis and full-blown spells. What’s not to like? Before the rule of Princess Luna and Queen Celestia (I refuse to call her ‘Princess’, Hasbro) the Unicorns were the ones to raise the sun and the moon. Plus, Unicorns seem to carry an air of sophistication and class to them; they’re the tribe that specializes in European architecture, tea cookies, fancy silverware and chocolate croissants. Unicorns at times seem kind of elitist, but hey, you would be too if you were freaking magical.

Pegasi can fly (obviously) and stand and walk on clouds. Flying is one of my all-time favorite super powers, and I know it’s one of yours too; everyone from Superman fans to Peter Pan enthusiasts are fond of flying. They’re also responsible for changing the weather. Also for the most part they seem to be fast, strong and brave. Collectively as a tribe, the Pegasi are very organized and militaristic, even being described as “a race of mighty warriors” prior to the 3 tribes’ unification and their original homeland being decorated with various war memorabilia. Pegasi are the superheroes of the MLP-verse, but without the embarrassing spandex.

It’s one of MLP’s strengths that even the non-magic Ponies possess a form of ‘passive magic’ unique to them, giving them a near-supernatural connection to nature, plants and animals (OK, other animals). Even the ‘ordinary’ citizens are fun. In addition to being physically stronger and more durable and resilient than the other Pony tribes (only Earth Ponies can buck trees and such), the Earth Ponies specialize in fun mundane (fundane?) talents like farming, rodeo, fashion, snowboarding, skiing, music, performing, partying and of course baking sweet treats and desserts.

I really don’t know why I like the Earth Ponies so much; by all accounts I should consider them the boring tribe since they can’t fly or do magic. The best thing I can equate it to is eating a really good veggie sub: if you toast the bun just right and put a decent amount of fresh, crisp vegetables, condiments, oils, seasonings and spices in there, then you don’t miss the meat. Similarly, if you make your character(s) really fun, interesting and engaging, give them a killer hook and a really cool Cutie Mark, then you don’t miss the powers.

Now, onto Cutie Marks. Jason turned me on to how cool this concept is. Everybody’s special talent is illustrated right there for all to see. That would be so cool to have in real life; if you saw someone with the symbol of a screw and a baseball on his/her forehead, you’d already be clued in that he/she was crazy and therefore you’d avoid asking them directions..or anything else.

Some of my favorite Cutie Marks (at the moment):

It figures that the Unicorn whose special talent is magic itself would also possess one of the fanciest Cutie Marks on record. A 6-pointed sparkle surrounded by 5 mini sparkles. One word: snazzy. 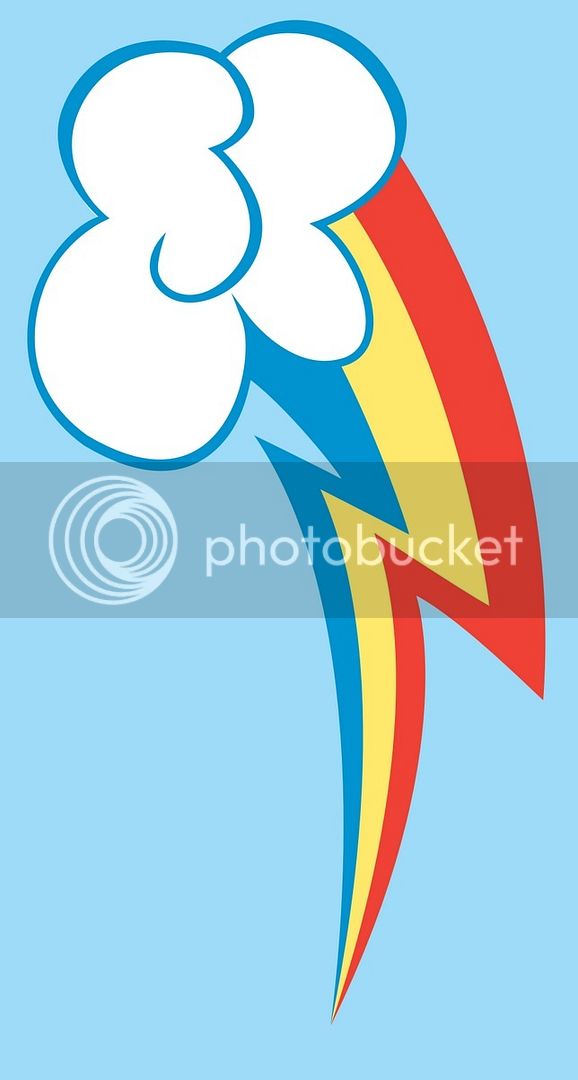 No wonder RD is kind of cocky: her Cutie Mark is positively bitchin’. As if having rainbow-striped hair wasn’t cool enough. A storm cloud with a rainbow-striped lightning bolt? It somehow manages to be adorable and badass at the same time. 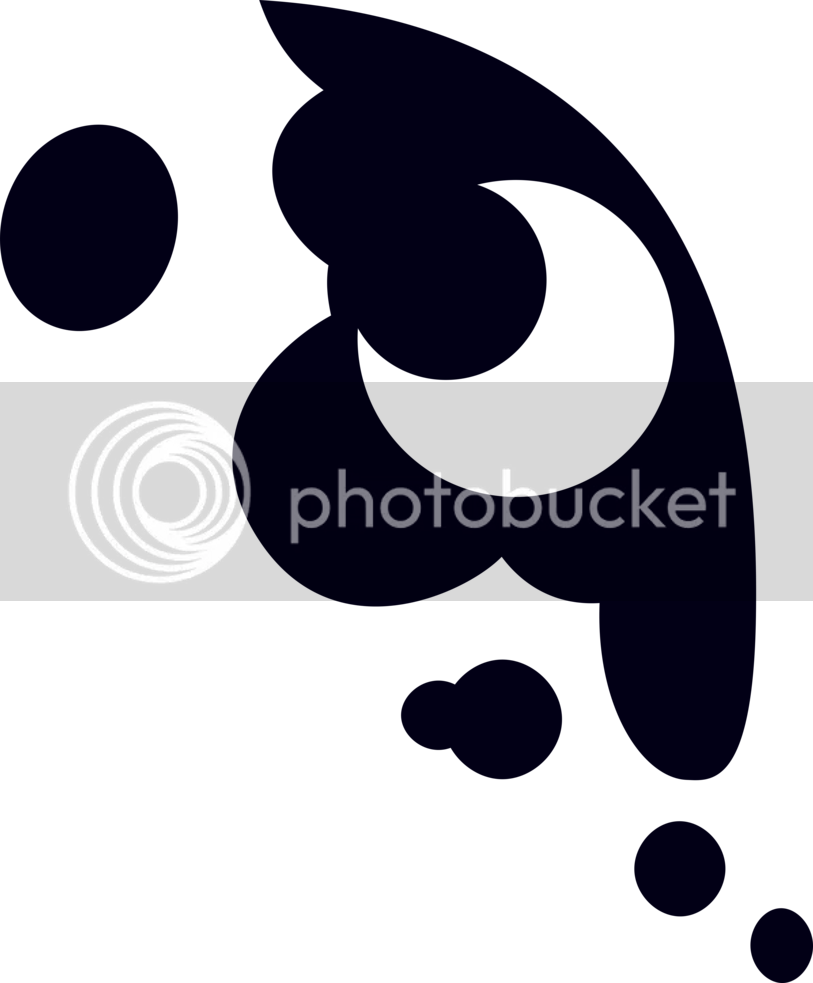 I admit it, I’ve always liked Luna more than Celestia. Indigo’s one of my second favorite colors, I’m kind of a night person and I can relate to being misunderstood (not tryin’ to get all emo on ya, though). Any symbol which features a crescent moon and a portion o’ the night is fine by me.

There aren’t any dudes in the Mane 6 for obvious reasons, but I like what I saw of this guy. I dig the white and silver color scheme and his Cutie Mark–3 stylized snowflakes–remind me of the Tiki designs on some of my Hawaiian shirts or those little sticker things that were on the floor of our bathtub when I was a kid. Plus, I like the concept of a male Earth Pony who’s full-on into skiing and snowboarding. Man, I miss Fuel TV. Just a design I like. Nice colors, and the barrettes are a nice touch. Plus, as her Cutie Mark implies, her special talent is baking and desserts, you know I like that.

Some might consider this choice redundant, since I already put an indigo-colored Pony with a nocturnal themed Cutie Mark on this list, but this is an indigo-colored Pegasus whose Cutie Mark is a thin crescent moon surrounded by 2 swirling comets/clouds/nebulae, it’s completely different. Plus I really like the name Night Glider; it sounds like a syndicated spinoff series starring David Hasslehoff as a troubleshooter who hang-glides for justice. (Ssh. Don’t give ’em any ideas!)

Now this I can get behind: a Unicorn who can not only perform magic, but can also shape balloons into any objects imaginable. He’s like the Green Lantern, but with party balloons! As you probably gathered by this and the previous Cartoon Country “Build Your Own Fantastic Four”, I’m kind of on a silly superpowers kick right now.

This is a character who appeared in 2 episodes of the old syndicated My Little Pony ‘n’ Friends TV series. The Cutie Mark is a yellow duck carrying an umbrella — almost aggressively cutesy to be sure, but it’s ingenious in its’ simplicity. Plus, I just like the idea behind this character: a Pony with a duck fetish. I can kind of relate; growing up watching Daffy, Donald, Uncle Scrooge and Dukcman have made me a duck enthusiast as well.

-I’ll be going all old-school on you for these last 2 choices: we’re going back to the era B.L.F. (Before Lauren Faust) to the Cutie Marks of some of the G1 Newborn Twins Ponies. (If it’s twins, we’re interested in it.)

As their shared Cutie Mark suggests, these 2 were big on circuses and clowns (not the creepy, stalking murdering variety); the little anecdote on the back of their package told a little story about them making their clown dolls dance and caper around the room with their Pony magic. That’s adorable, but in order to enjoy that you have to act under the hypothesis that clowns aren’t freaky or scary.

“Let’s call clowns what they really are: smiling murderers!”

These 2 were big on alphabet blocks, hence this vary primary Cutie Mark. Simple and pwecious. But in all seriousness: even by pastel-colored magical talking Pony standards, who in their right mind names their kids NOODLES and DOODLES?? It’s a good thing this is a toyetic paradise, otherwise middle school would be a real blast for these 2!