Fun Trivia Fact: Chi-Chi’s name is a Japanese pun which translates to “Mother’s milk”. All of the Dragon Ball characters’ names are either puns or plays on words of some kind.

Yes, what Chi-Chi’s anti fans say I agree with. Sure, Chi-Chi overdoes it. Yeah, she can be a wet blanket at times and yeah, she goes ballistic on occasion, but in a way, I see her point! Her husband (and sometimes her son also) are always going off to fight or train to fight some alien or demon or otherworldly entity where there’s always the risk of them getting seriously injured or killed.

“Hey, honey bunch! I’m going away to to train for big fight with some invading alien fire breathing bowling pins who want to turn the planet into a giant bowling alley! If I don’t die, I’ll back next year-ish!”

Admit it, if that were going on in your household, you’d be stressed out too!

Given that Goku has actually died (and come back from the dead) not once, but twice and also once merged with the eternal dragon (and has come back from that too, somehow), Chi-Chi’s desire for a normal alien fighting free life seems perfectly understandable and sane to me.

It’s hard being the responsible one. People tend to label you as a “drag” and a “killjoy”. It’s a thankless job, but someone has to do it! At least Chi-Chi has a sense of order and discipline for her son. She doesn’t just let him do whatever like Goku.

I know that I’m kind of a weirdo (assuming that’s not painfully obvious at this point). Perhaps it’s because I have kind of a “thing” for fictional wives and mothers (and also I’m a sucker for chicks with black hair), I don’t find Chi-Chi’s desire for a Leave it to Beaver lifestyle free of danger, chaos and invading weirdos to be annoying at all. I may not agree with her methods, but I do see where she’s coming from.

There’s also the fact that Chi-Chi is one of the physically strongest female fighters in the Dragon Ball universe, even if she’s relegated to being comic relief most of the time. The woman can fight! She and Goku have been living off of their fighting tournament earnings for years! Although it’s not always shown, Chi-Chi is really in love with her husband and on the infrequent occasions when we do get a tender moment between the two of them, it’s very sweet to see. It gives me the warm fuzzies. 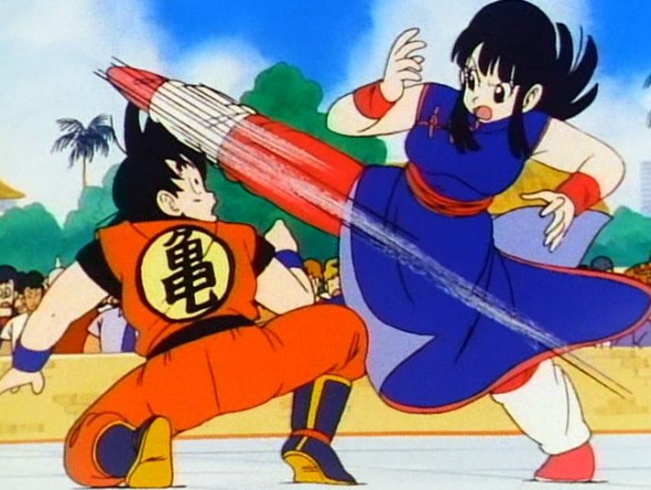 …if Donna Reed could kick your ass!