It’s that time again! Time for the next installment of What The Funny with another breakdown one of my favorite Rocko’s Modern Life shorts. 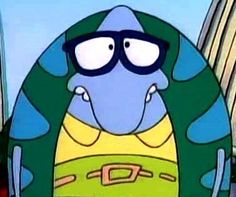 Before we begin, I’d like to once again apologize for the wait. I know that the gaps between these segments tend to get kind of long, but that’s mainly because 1) there are other things that demand my attention, and 2) I’m a ruthless perfectionist when it comes to my own work. Some of you out there may (understandably) be a little annoyed by the wait, but if I churned out the WTF segments in an assembly line fashion in order to get them out daily or even weekly, they’d be really half-assed, I wouldn’t like them, and I don’t think that you would either. No, the more detailed stuff takes longer. I know that I’m not fast, but I like to think that the quality of my work speaks for itself. Plus, like I said earlier, I’m only doing a select few of these, and so I’d prefer to space them out.

Having said all of that, on with the fun!

Synopsis: Rocko is pulled over by the police because of a missing gas cap and a squirrel hiding inside his car. With Rocko’s car impounded, he has to suffer the unspeakable torment of the Department of Motor Vehicles to retrieve it.

A police standoff turns into a tasteful soft shoe shuffle.

Brace yourself, for you are now entering a place where even the most rational person can be driven insane…the Department of Motor Vehicles!!

Rocko and Spunky walk to the DMV and Rocko asks Spunky to wait outside as he walks in the building. As he waits in a long line, the police officer announces through the loudspeaker that Spunky should be picked up at the security desk. Rocko picks up the dog and ties him up outside; though he reassures Spunky that he will be back for him, and immediately afterwards, we see another dog’s skeleton tied to a leash!

Rocko runs into Filburt (his first appearance in the series, btw) who says that the computers give off harmful radiation and that the metal plate in his head is vibrating. Filburt sounds a bit like Sol from the Jerky Boys here. Filburt then advises Rocko “When you take your driver’s test, don’t get the fat guy!”

Rocko makes his way to the eye exams room and sits on the chair to read the chart in front of him. When he reads the last line (“The doctor is sneaking behind you. He’s a Madman. Get out while you still can.”), he finds that the chair is really the doctor, a creepy guy with four wheels for feet. He becomes startled and stops in midair with his eyes enormously protruding. As he remains in his exaggerated display of fright, the doctor immediately gets him to hold his position; the scare tactic is revealed to be a rather efficient way of allowing him check his patient’s eyeballs.

Rocko then goes to room 101 to attend a driving class, which is being taught by a very loud German soldier cat (voiced by Tom Kenny)

The class is made to watch a drivers’ education film “Red Concrete” (a classic!) Where they learn the RULES OF THE ROAD! I love how even the instructional film warns “Don’t get the fat guy!”.

When Rocko falls asleep, he wakes up to find a diploma of traffic school taped to his face. He later waits outside for the driving instructor, who turns out to be a chubby elephant.He tests Rocko into driving vicariously through an obstacle course. When it doesn’t go as well, the instructor finally gives in and gives Rocko a form for his license. Rocko takes the form to the front desk to Chuck and Leon. He tells them that he had the fat guy, and then we get the payoff for this running gag:

The perfect payoff to a perfect gag.

Near the end of the short, we get this exchange between a young boy cat and his father, which parodies the conclusion of Frank Capra’s 1946 film It’s A Wonderful Life:

Boy: Daddy, Daddy, teacher tells me every time someone drives with a gas cap on, an angel gets its wings!
Father: Your teacher’s full of snot!

Heh. You know that if this weren’t on Nickelodeon, he wouldn’t have said “snot”.

This is another one of the great Rocko shorts. A short about the DMV is an unusual subject for a kids’ cartoon, as Nick’s target audience isn’t old enough to drive, but anyone who’s ever had to go to the DMV for any reason knows what a madhouse that building is and what a frustrating experience it can be. This short takes the drudgery and frustration of that experience and ramps it up to a comical level, which is what Rocko’s Modern Life does best.