First, a little back story: I originally planned to showcase 2 of my favorite Slappy Squirrel shorts as part of a What The Funny miniseries I was going to do for New Looney Tunes last year (why insert Slappy into New Looney Tunes? I’ll get to that), but I was unable to go ahead with that for various reasons, not the least of which being that Cartoon Network and Boomerang for whatever reason opted not to air New Looney Tunes on either of their channels in the States, so I decided to just break down the 2 Slappy shorts individually as Cartoon Countries instead.

Waste not, want not.

However, I still hold on to the hope that I can one day do a New Looney Tunes What The Funny somewhere down the line. Now that we’ve got that out of the way, on with the fun!

The Slappy short we’ll be looking at today is Critical Condition.

Premise: Slappy gets roasted by famous critics Lean Hiskel and Codger Eggbert (no prizes for guessing who these guys are based on), and sets out to make a counterpoint in her own inimitable fashion.

…entitled The Best of Looney Tunes, which features famous WB shorts that the show can run clips of since they’re all owned by the same parent company. This compilation also includes some of Slappy’s old shorts. 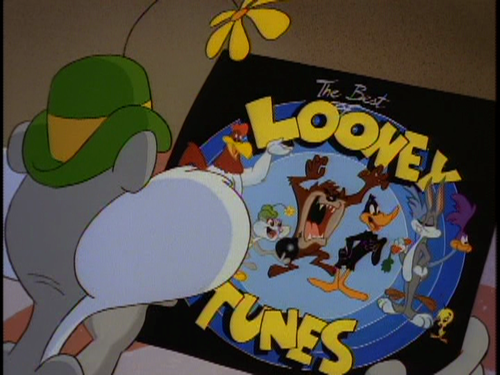 I always liked how in-universe Slappy Squirrel is a Looney Tune alongside Bugs, Daffy, Porky et al. Warner probably has no interest in doing this, but I think it would be cool if for the new Animaniacs series set to air on Hulu in 2020, they would produce some specially made ‘vintage’ Slappy shorts, similar to the “He’s Bonkers!” shorts that Disney made for Raw Toonage, just so we could see what kind of cartoons Slappy starred in within this revisionist history.

Among the cartoons highlighted are: 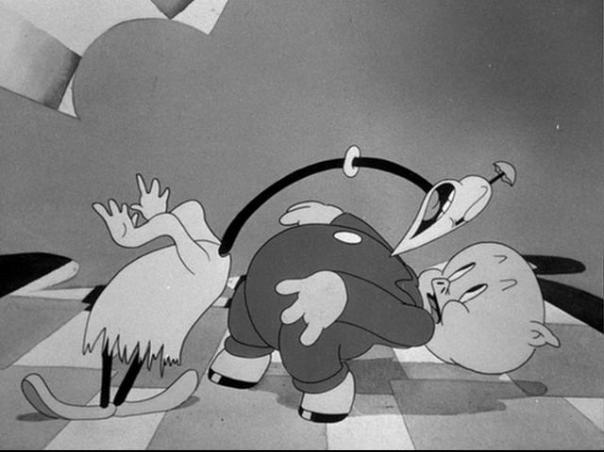 -The critics are yukking it up at these clips. While Skippy is just happy that they’re happy, Slappy wants to know when they’re going to get to her cartoons. They do, but unfortunately, Lean and Codger consider Slappy to be “the only Looney Tunes star [they] actually hate”, labeling her “tremendously unfunny”. 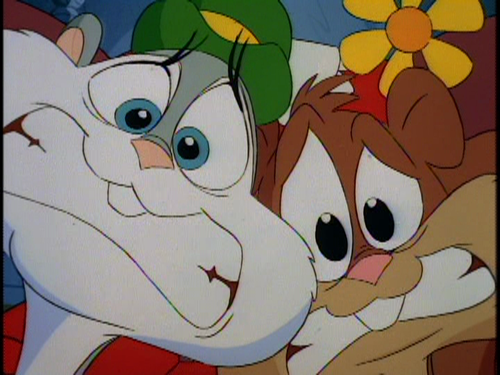 One bit I like is how whenever the critics insult Slappy on screen, Slappy herself takes a hit, literally.

“She never made a funny cartoon in her life!” 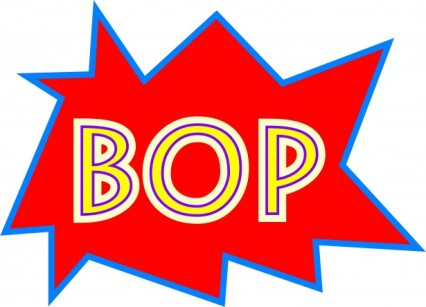 “Let’s face it: Slappy Squirrel is the UN-FUNNIEST cartoon character of all time!” 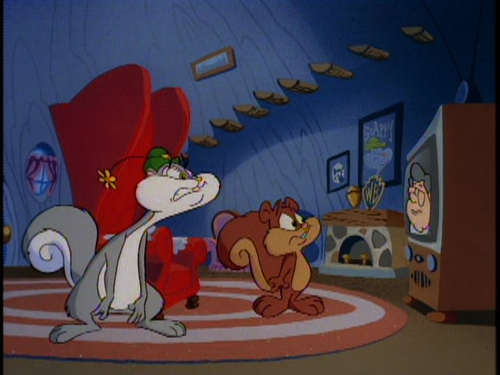 After recovering from that ego-bruising, Slappy and Skippy regroup to make their response. Slappy offers these words of advice:

“If you wanna go on TV and shred someone’s career to pieces, you have the right to do that, but if you’re gonna do that, don’t go leaving your names and addresses in the phone book!” Before proceeding to destroy the critics’ home with a giant missle. 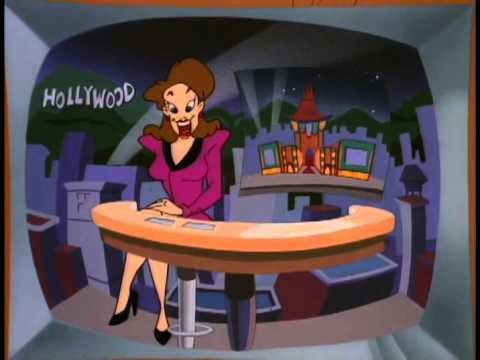 Fortunately (or unfortunately, depending on your point of view), the critics were away getting their legs waxed and weren’t home for the explosion, but they will be attending the premiere of Steven Spielberg’s new movie. So the squirrels decide to take in a flick.

TINY TOONS CAMEO! Shirley the Loon is attending the premiering with her namesake, Shirley MacLaine.

Slappy and Skippy infiltrate the theater and proceed to give the critics the works. First by impersonating ushers who refuse to let them in, with Skippy even laying them out with karate. They finally get past him with a HUGE bribe. Then we get this exchange: 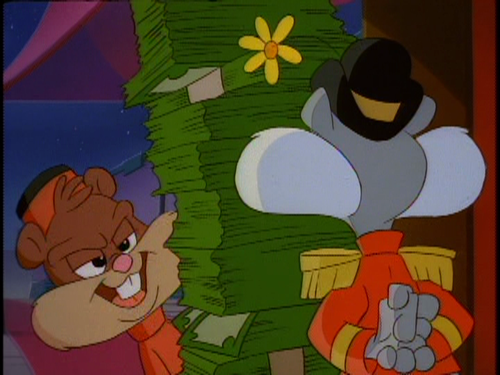 Slappy: Congratulations, Skippy. You just paid for your college education.

Slappy: (without missing a beat) Get me Sigfried and Roy’s autograph, will ya?

After further chicanery, including Slappy at the concession stand treating Eggbert to a (literal) tub of popcorn (“Here ya go, Shamu!”) and buttering it with lard from Eggbert’s gut(!)… 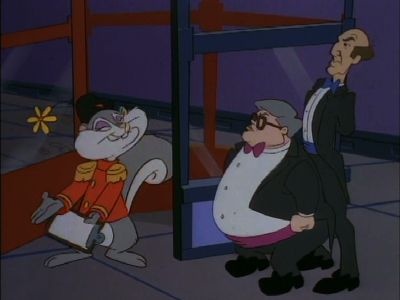 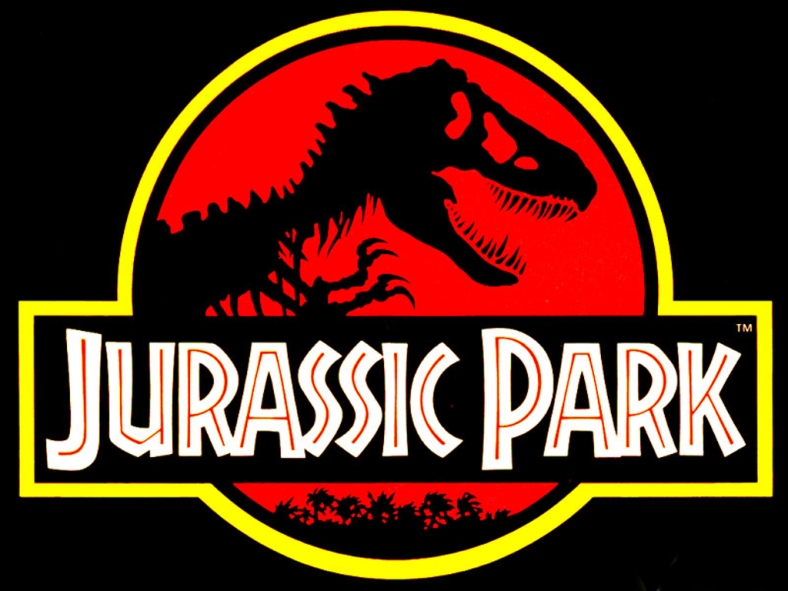 …Which was totally NOT Jurassic Park, Spielberg’s latest film at the time…

Only for the squirrels to trap them inside the film (I love cartoons!) where they’re chased by a predatory T-Rex, but no worries, the other giant missle fired by Slappy gets to them first.

Afterward, on their next show, Hiskel and Eggbert (in bandages and casts) officially retract their original critique of Slappy, completely changing their tune (or at least too traumatized to want to make any more waves), and proclaim her “the funniest cartoon character of all time”, right before Skippy blasts them with TNT into a hole, just to keep things from getting too treacly.

-“Critical Condition” isn’t deep or layered in any way; it’s plot is simple: some critics rip on Slappy, and Slappy retaliates…hard…but the gags and wisecracks in this short are top-notch, which is why this has always been on of my all-time favorite Slappy Squirrel shorts.